It's time for Biden to keep his promises on Israel and the U.N. 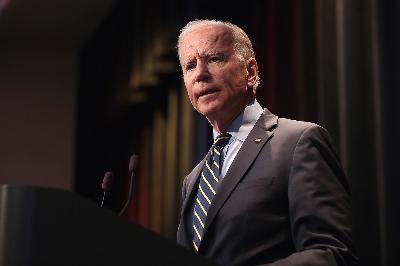 President Joe Biden (File photo)
"A running joke at the United Nations is that it wouldnât be Christmas Eve if the U.N. General Assembly wasnât still deliberating the next yearâs budget.

This year, instead of dithering, the grinches at the U.N. delivered an unwelcome gift to Israel: funding for the U.N. Human Rights Councilâs (UNHRC) commission of inquiry into last springâs conflict between Israel and Hamas. This is precisely the âdisproportionate focus on Israelâ President Biden claimed he would combat at the U.N. Itâs time for his administrationâs policy to match his rhetoric.

In May, Hamas fired more than 150 rockets at Israeli civilian areas, including Jerusalem. Then-Prime Minister Benjamin Netanyahu declared that Hamasâ action âcrossed a red line,â and ordered airstrikes against Hamas targets throughout the Gaza Strip. The conflict, the fourth outbreak of large-scale hostilities between Israel and Hamas in 13 years, only lasted 11 days, but Hamas fired as many rockets and mortars as it did during the entire 50-day-long 2014 conflict.

International media and public outcry against Israelâs legitimate defensive action was immediate. The UNHRC met, members condemned Israelâs defense of its land and citizens and passed a resolution calling for an investigation into any and all Israeli actions, to be conducted on an annual basis, indefinitely. Yet, Hamasâ blatant disregard for the life of both Israeli and Gazan civilians escaped any scrutiny. This is the status quo when it comes to the U.N.âs treatment of Israel.

Despite the commissionâs inevitable conclusion to the contrary, Israel complied with its legal obligations. According to an assessment conducted by retired U.S. generals, admirals and military legal advisors on behalf of the Jewish Institute for National Security of America (JINSA), âIDF military operations in Gaza reflected a consistent and good faith commitment to respect and implement the Law of Armed Conflict (LOAC).â The task force also found that Hamas violated LOAC by deliberately attacking Israeli civilian population areas, launching indiscriminate attacks, and placing its military infrastructure in and near civilian buildings. In fact, some 900 Hamas rockets â one-seventh of all rockets launched â landed inside Gaza itself, killing 20 Gazan civilians and injuring more.

By comparison, the Israel Defense Forces (IDF) took immense effort to avoid civilian casualties, even if it sacrificed its strategic and tactical advantage. Before an airstrike, the IDF dropped leaflets, made telephone calls, and sent text messages to warn Gazans to evacuate before airstrikes. For example, in the strike on the al-Jalaa building, housing the Associated Pressâ office, the IDF destroyed an advanced Hamas military capability was destroyed while avoiding any civilian casualties, due to its precautions. Nevertheless, Israel was accused of war crimes. And yet, it was Hamas who violated LOAC, by using a civilian building to develop electronic warfare capabilities to jam Israelâs Iron Dome.

The Biden administration should use its seat on the UNHRC to defend the legality of Israeli operations. After all, combatting the councilâs anti-Israel bias is part of how the administration justified rejoining the flawed body after President Trump withdrew from it.

During a hearing with the House Foreign Affairs Committee last June, U.S. Permanent Representative to the United Nations Linda Thomas-Greenfield argued that the United States has more leverage as a member of the council. And yet, in a response to a Rep. Ted Deutchâs (D-Fla.) question on what reforms the United States is pursuing, Thomas-Greenfield offered none, except that the United States would work with its closest partners and allies to push back when the council moves in the âwrong direction.â These are the same allies and partners that voted in favor of funding the perpetual commission of inquiry.

With its biased witch hunt against Israel, the UNHRC has clearly moved in the âwrong direction.â It is past time for the Biden administration to do something about it. The administration can begin by forcefully defending Israelâs compliance with LOAC in international fora, just as it would for similar lawful U.S. military actions. It should then publicly present its plan for UNHCR reform.

Congress should hold the administration accountable for its commitments. When Secretary Anthony Blinken heads to the Hill for budget hearings, presumably next month, Congress should demand that U.S. funding for the commission of inquiry be withheld.

Finally, the Biden administration should learn from Israelâs experience. The latest Gaza conflict underscores the need for U.S. and allied militaries to prepare for operations against adversaries that ignore the laws of war while claiming to be victims. In preparation for the type of spurious accusations Israel now faces, the United States should undertake a broad campaign to communicate effectively the legality of U.S. and allied military operations.

The UNHCRâs perpetual commission of inquiry represents yet another targeted attack by the international community on the Jewish state. It is also a slap in the face to the reforms the Biden administration has pledged to advance.

Now, more than ever, President Biden must live up to his commitments to fight this deeply ingrained U.N. bias."
Date
January 12, 2022
Title
It’s time for Biden to keep his promises on Israel and the U.N., The Hill
Author(s)
Morgan Lorraine Vina and Blaise Misztal
Original Source
https://thehill.com/opinion/international/589229-its-time-for-biden-to-keep-his-promises-on-israel-and-the-un?rl=1
Attachment
Click here to view this article in MS Word/PDF format