Itâs time for the U.S. to resign from the UNHRC (again) 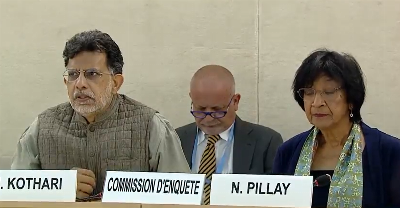 Members of the Commission of Inquiry, June 14, 2022 (Screenshot)
"The fact that the United Nations is biased against Israel comes as no surprise. Indeed, U.N. agencies have mounted more attacks against the worldâs only Jewish state and the Middle Eastâs only democracy than against all of the worldâs greatest criminal actors combined.

But now, the so-called U.N. Human Rights Council (UNHRC) has just mounted what is surely the world bodyâs most concerted effort to condemn the Jewish state for its very existenceâand in the process destroy it.

The UNHRCâs extraordinary year-old âCommission of Inquiryâ (COI) has just issued its first of a perpetual schedule of screeds against Israel. Unsurprisingly and unashamedly, the document attempts to delegitimize and demonize Israel using double standardsâthe classic â3 Dsâ recipe for anti-Semitism.

The COI manages to do all this while utterly ignoring the fact that Israelâs behavior has been necessitated by Arab aggressorsâboth genocidal foreign armies crossing its borders and murderous terrorists on its streetsâfor every one of its first 74 years.

Encouragingly, some 22 nations have already criticized the new COIâs first report for its blatant anti-Israel bias. No wonder voices like that of former U.S. Ambassador to Israel David Friedman are calling on the Biden administration to rescind its recent decision to rejoin the UNHRC.

The only permanent item on the UNHRCâs meeting agendas is Item 7, a scheduled hate-fest directed at Israel. Most Western democraciesâto their creditâexit UNHRC headquarters in Geneva when that item is brought up for discussion.

Over the past two decades, nine special UNHRC commissions have been established to investigate/criticize Israel alone. Perhaps the most notorious of these was the 2009 Goldstone Commission, which viciously attacked Israel until Richard Goldstoneâthe panelâs namesake and chiefâformally renounced and retracted the Commissionâs error-infested report.

This latest COI is unusual in several ways:

It is not limited to the investigation of a specific conflict or incidents. The events of May 2021, which saw 4,000 missile attacks from Gaza against Israeli civilian centersâand Israelâs counter-attacks on Gazaâwere the trigger for the COI, but its charter is actually unbounded.

It is not limited to a particular time period. The COIâs charter allows it to evaluate all Israel-Arab interactions since Israelâs birth in 1948âand even has the mission to investigate future conflicts.

It is not limited to a particular geography. The COIâs charter allows for the investigation of Israel-Arab interactions and conflicts that happen anywhere in the world.

It is not limited in duration. The COI is now a standing institution of the United Nations, much like the UNHRCâs Agenda Item 7. Unlike all other such U.N. commissions, this one has no expiration date.

It is not limited by resources. Its generous budget this year is around $5 million, and its charter calls for at least two reports annually and indefinite funding renewals.

It is not limited in its bias. COI chairperson Navi Pillay of South Africa and her two fellow commissioners, Chris Sidoti of Australia and Miloon Kothari of India, all have an extensive and years-long public record of anti-Israel speeches, writings and actions that make them completely unfit to serve as impartial arbiters.

The recently issued COI report, in fact, has few surprises, given its authorship. This first report examines the âroot causesâ of the problems and discovers thatâthey are Israelâs doing.

Also missing are references to the Hamas charter calling for the genocide of the Jews, or even Palestinian Authority President Mahmoud Abbasâs comment about âfilthyâ Jews, or the lavish bounties Abbas pays to Palestinians who murder Jews.

Reading the report, one can only conclude that the racist, hate-filled Jews of Israel just woke up one morning andâwithout any real provocationâdecided to persecute and murder Arabs.

Far worse than these individual lies, however, is the reportâs condemnation of Israel for being a Jewish stateâincluding its right of return for Jews from anywhere in the world. The COIâs mission is not to criticize Israelâs policies, but rather is a bigoted âstar chamberâ whose job is to undermine Israelâs reason for being.

The COIâs conclusion was foregone: Israelâs existence is evil and must be ended.

The report is so detached from Middle East reality and history that 22 nations have submitted a protest letter against it, led by the United States, and including other American, European, Asian and African countries.

The letter begins, âWe believe the nature of the COI is further demonstration of disproportionate attention given to Israel,â adding the concern that, âthe COI will contribute to the polarization of [the] situation.â

Hillel Neuer of Geneva-based NGO U.N. Watch has demanded that the COIâs chair, Pillay, recuse herself or be removed by the UNHRC. Both U.N. Watch and the Jerusalem Center for Public Affairs (JCPA) submitted to the COI in advance of the latest report hundreds of thousands of pages documenting Arab persecution and forced exile of Jews, as well as belligerence against Israel for decades. This preponderance of evidence was not even acknowledged in the COI document.

JCPAâs Anne Bayefsky states that âthe reportâs overriding standard of âproofâ that the Jewish state is allegedly a moral affront to humankind is this: the U.N. said so.â

Former U.S. Ambassador to Israel David Friedman believes the Biden administrationâs decision to rejoin and resume funding the UNHRC after the United States left it in 2018 was a mistake.

âThe U.S. never should have gone back in. Itâs a terrible organization and has no credibility,â said Friedman, responding to the UNHRC report. âThis is an organization that is deeply, deeply anti-Semitic. The U.S. has no business being part of it and contributing to it,â he added.

In short, the UNHRC is an anti-Semitic mob that functions to support Palestinian terrorism and destroy Israel. The United States will never âreformâ such an utterly corrupt agency, and we disgrace ourselves by participating in and funding such racist enterprises.