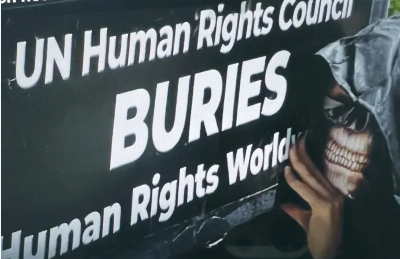 One of the long-robed, hooded pall bearers marches with a casket outside UN Headquarters in New York to protest the Human Rights Councilâs anti-Israel bias. (Photo courtesy STANDWITHUS)
"Last month, sixteen long-robed, hooded pall bearers marched with caskets on their shoulders outside the United Nations Headquarters in New York. Pedestrians and UN employees stared at the caskets marked âUN Human Rights Council Buries Human Rights Worldwideâ and âUN Human Rights Council is Buried in Corruption.â The âfuneral for human rightsâ was filmed by StandWithUs â an international education organization â to draw attention to how the UN and its Human Rights Council (UNHRC) are burying human rights tragedies worldwide while only focusing exorbitant resources on a biased scapegoating campaign against one state: Israel.

The procession was part of a larger StandWithUs campaign to protest the UNHRCâs most recent and most dangerous act, which is part of its systemic anti-Israel bias in the United Nations â the Commission of Inquiry (COI) on Israel. This COI is unlike all other COIs that are designed to investigate conflicts around the world. It is designed to last forever. It receives excessively disproportionate funding, twice more than the COI on the Syrian Civil War.

Further, the COIâs conclusions in-part rely upon âtestimonyâ from anonymous sources and remain at the mercy of commissioners who have all demonstrated extreme anti-Israel bias before the inquiry was even announced. As noted by the StandWithUs campaign, the very president of the commission has accused Israel of apartheid while another commissioner has referred to Palestinian terrorism as resistance.

As expected, the commissionâs first report, presented to the UN General Assembly on June 13, unsurprisingly finds Israel overwhelmingly guilty for the Middle East conflict, naming Israel 150 times, while only naming Hamas â the terrorist organization that has ambushed Israeli civilians with tens of thousands of rockets fired from civilian sites in Gaza â three times. The report fails to identify Palestinian terrorism or incitement as a âroot cause of the conflict.â Instead, it accuses the alleged Israeli âoccupationâ of being âthe one common issue that constitutes the underlying root cause of recurrent tensions, instability and protraction of conflict.â

The COIâs findings are yet another example of systemic anti-Israel bias in the UNHRC, where Israel already remains the only country subject to scrutiny in each UNHRC session under a permanent agenda item. According to watchdog UN Watch, Israel has unfairly been assigned nearly 55 percent of all condemnatory resolutions (99 total) since 2006, while it has endured 70 percent of all condemnatory resolutions (125 resolutions total) in the UN General Assembly since 2015.

Such institutional bias in the UN and UNHRC - which has been condemned by prior secretaries-general such as Kofi Annan and Ban Ki-Moon â is arguably a consequence of non-democratic countries being conceived into statehood and then usurping both the UNâs membership and agenda. UN Watch observes that sixty-six percent of member countries in the UNHRC â the very body entrusted with guarding human rights worldwide â are non-democracies, many of which commit grave human rights violations.

Such states have been accused of castigating Israel to distract human rights bodies from their own ongoing offenses. For context, some of the worst ongoing human right violations that have yet to be condemned by resolution in either the UNHRC or UN General Assembly include ongoing genocide of the Uighurs in China, as well as slavery in Mauritania.

It is unsurprising that the US State Department has since come out in opposition to the COI on Israel, citing its âone-sided, biased approach that does nothing to advance the prospects for peace.â Sixty-eight senators have also since voiced their opposition to the COI in a letter; and now, 29 House Representatives are listed as sponsors for the COI Elimination Act (H.R. 7223), which has since been referred to the House Committee on Foreign Affairs.

The COI even faced notable opposition in the UNHRC, where 23 out of its 47 members refused to vote in favor of creating the COI on Israel. Many other democracies in the UNHRC such as Austria, Czech Republic, Germany, and the UK actually voted to oppose creating the COI in the first place.

Twenty-two countries have since signed the US joint-letter presented in the UNHRC on June 13 condemning the Commission of Inquiry and calling for an end to the disproportionate scrutiny that Israel faces in the Council.

Roz Rothstein, CEO of StandWithUs, observes, âThe antisemitism of the UNHRC kangaroo court against Israel must not be taken with any seriousness, and certainly should not receive further funding. With human rights abuses rife around the world, the importance of restoring the integrity of human rights organizations remains of utmost importance, especially as reports of ongoing genocide, civilian massacres, and even slavery continue to go ignored.â"
Date
June 18, 2022
Title
Mock funeral protests UNHRC anti-Israel bias, The Jerusalem Post
Author(s)
Jordan Cope
Original Source
https://www.jpost.com/diaspora/article-709764
Attachment
Click here to view this article in MS Word/PDF format