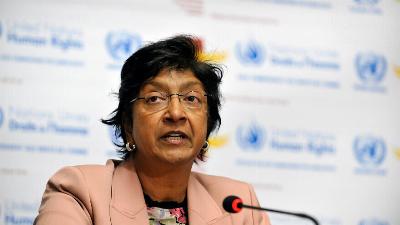 Navi Pillay (File photo courtesy the United Nations)
"Former UN high commissioner for human rights Navanethem âNaviâ Pillay has made a career of bashing Israel. The 80-year-old South African â who hails from Durban, home of two antisemitic âworld conferences on racismâ â is now back in the saddle doing what she loves most.

Her latest prized gig consists of chairing the âIndependent International Commission of Inquiry on the Occupied Palestinian Territory, including East Jerusalem, and Israel,â established last year by the UN Human Rights Council (UNHRC) for the purpose of concocting a report to demonize the Jewish state.

This isnât how the resolution (S-30/1), adopted at the UNHRC âemergency special sessionâ on May 27, 2001, was worded, of course. But the gist was as clear as the title of the bogus commission is long.

Nor did Pillay or co-commission members Miloon Kothari of India and Chris Sidoti of Australia disappoint. On the contrary, they came up with just the right results to reach the foregone conclusion that Israel is an illegitimate aggressor.

In its introduction to the 18-page assault disguised as an official document to be presented to the 50th session of the UN General Assembly, which kicks off on Monday, the report expresses gratitude to the âGovernment of the State of Palestine for facilitating consultations and meetings with relevant authorities,â and to the âGovernment of Jordan, which allowed the Commission access to its territory in March 2022.â

It goes on to state: âThe Government of Egypt indicated its willingness to cooperate with the Commission, but has not yet responded to the Commissionâs request to access the Gaza Strip through the Rafah crossing. The Commission also sought to engage with the de facto authorities in Gaza, but at the time of writing no response had been received.â

And then it comes to the crux, though crucifixion would be a better description.

âThe Commission regrets the lack of cooperation by the Government of Israel, and its refusal to allow entry to Israel and to permit access to the Occupied Palestinian Territory, despite the desire of the State of Palestine to allow the Commission to visit. This refusal obstructed the engagement of many Israeli and Palestinian victims, witnesses and other stakeholders with the Commission.â

Jerusalem had good reason to reject the whole endeavor, and not only due to lengthy experience with the joke of a âhuman rightsâ body that singles out Israel censure at every opportunity. In this case, the targeted-assassination plot was born in the immediate aftermath of Operation Guardian of the Walls, Israelâs 11-day campaign in May 2021 to defend its citizens and cities against the thousands of Hamas and Islamic Jihad rockets launched from Gaza.

The Pillay-headed trio, like the UNHRC as a whole, has no interest in facts, however. It is solely focused on âfact-findingâ for dirt with which to demonize Israel.

What the current commission produced is no less of a doozy than its predecessors, since it cites previous reports of the same nature to highlight Israelâs ostensible refusal to rectify past crimes.

These include the bogus reports on Operation Cast Lead in 2008-2009 and Operation Protective Edge in 2014.

According to Pillayâs team, the former âfound that Israel failed to investigate and, when appropriate, prosecute acts... involving serious violations of international humanitarian law and human rights,â and âconcluded that there were serious doubts about the willingness of Israel to carry out genuine investigations in an impartial, independent, prompt and effective way as required by international law... [It] also took the view that the system presented inherently discriminatory features that made the pursuit of justice for Palestinian victims extremely difficult.â

As for the latter: âThe commission of inquiry expressed concern that impunity prevailed across the board for violations of international humanitarian law and international human rights law allegedly committed by Israeli forces, and found that Israel must break with its ârecent lamentable track recordâ in holding wrongdoers accountable.â

The Pillay dossier then cites the High Commissioner for Human Rights report on the implementation of the other two, which âfound a lack of accountability by Israel for violations in the Occupied Palestinian Territory on account of two sets of shortcomings: physical, financial, legal and procedural barriers that restricted the ability of Palestinians, particularly those living in Gaza, to gain access to justice, and the failure to investigate all allegations.â

Summing up the situation today, the Pillay commission ânotes the strength of prima facie credible evidence available that convincingly indicates that Israel has no intention of ending the occupation, has clear policies for ensuring complete control over the Occupied Palestinian Territory, and is acting to alter the demography through the maintenance of a repressive environment for Palestinians and a favorable environment for Israeli settlers.â

Thereâs a mendacious mouthful for you â one that only antisemites can swallow. Ditto for all the vitriol that Pillay has spewed over the years, denouncing the only democracy in the Middle East for atrocities it didnât commit, while siding with its enemies, whose human-rights abuses are as plain as they are indigenous to their societies.

A month before the end of her dubious tenure as human-rights high commissioner, for instance, she issued a particularly egregious parting hurrah. The timing was perfect for a tirade from the retiring radical, as Israel was in the throes of the 2014 Gaza war.

Referring to what she called the âsame pattern of [Israeli] attacks on homes, schools, hospitals [and] UN premisesâ as in past military campaigns,â she said that ânone of it appears to me to be accidental.â

She failed to mention the extensive Hamas tunnel network that Israel was in Gaza to destroy. That the underground passageways were equipped with weapons, handcuffs, IDF uniforms and anesthetic-filled syringes for the express purpose of kidnapping and killing Jews didnât make it into her condemnation.

She ignored, as well, Hamasâs use of its population as human shields, and didnât give the slightest nod to Israeli Air Force pilots, who not only dropped leaflets to warn Gazans of imminent shelling in specific areas, but aborted missions when they spotted women and children in their crosshairs. What she stressed, instead, was that the United States âprovided almost $1 billion in providing the Iron Domes [sic] to protect the Israelis from rocket attacks; [yet] no such protection has been provided to Gazans against the shelling.â

This egregious inversion of defense and offense is quintessential Pillay, so the remark wasnât surprising. Greater astonishment was due the self-proclaimed feminist a few months earlier, during an address to the UNHRC.

Dusting off an old libel lodged in 2005 by then-UN Special Rapporteur on Violence against Women Yakin Erturk, she blamed Israel for Palestinian menâs abuse of Palestinian women. The âoccupation,â she suggested, robs Palestinians of their manhood. Feeling castrated by big bad Israel, these emasculated males take out their frustration on their wives, mothers, sisters and daughters.

George Orwell is chuckling in his grave. Still, the rest of us shouldnât be laughing.

As Touro Institute on Human Rights and the Holocaust director Anne Bayefsky cautioned this week in JNS: âAlthough this charade [of a commission] is obviously tainted and flawed, indifference to it would be a grave mistake. The âinquiryâ has no end date and is being financed in perpetuity. Now on the UN schedule are two reports every year, a perpetual drumbeat of modern antisemitism â the delegitimization of the Jewish state. Report No. 1 is all the evidence that decent people and democratic states need to tear down this wall of hate and intolerance.â"
Date
June 10, 2022
Title
Navi Pillayâs revitalized anti-Israel career, The Jerusalem Post
Author(s)
Ruthie Blum
Original Source
https://www.jpost.com/opinion/article-709090
Attachment
Click here to view this article in MS Word/PDF format