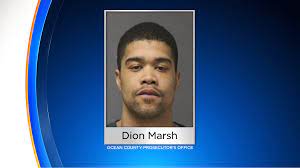 27-year-old Dion Marsh was charged Friday after a string of incidents around Lakewood, NJ, that began at about 1 p.m., when he assaulted a driver and stole his car, the Lakewood Police Department said. At around 6 p.m., Marsh hit another man with the vehicle, who was left in stable condition.

Before 7.p.m, Marsh then stabbed a third man in the chest, and at about 9 p.m. struck another pedestrian with his car. Both victims were in critical but stable condition on Saturday.

All four of the victims were Orthodox Jews, according to reports in the local Lakewood Alerts and Lakewood Scoop news sites...

The Anti-Defamation League said it was 'saddened and outraged' by the series of attacks, emphasizing that Marsh made antisemitic remarks upon his arrest.

'I am personally horrified at the cruelty with which the suspect allegedly conducted himself,' said Scott Richman, ADL NY/NJ Regional Director. 'More needs to be done proactively to prevent violence against the Jewish community, and in particular visibly identifiable Jews in Ocean County and across our region.'

'Jews should not be afraid to freely go about their business without living in fear that they will be targeted for violence,' Richman continued..."
Date
April 10, 2022
Title
NJ Man Charged With Attempted Murder After Antisemitic Stabbing, Hit-and-Runs, The Algemeiner
Original Source
https://www.algemeiner.com/2022/04/10/nj-man-charged-with-attempted-murder-after-antisemitic-stabbing-hit-and-runs/
Attachment
Click here to view this article in MS Word/PDF format