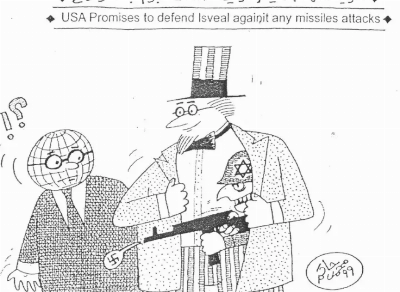 An image distributed at the 2001 Durban Conference
"As deputy director of the State Departmentâs Office of International Conferences, I helped organize and provide logistical support for the USâs delegation to the World Conference Against Racism, Racial Discrimination, Xenophobia and Related Intolerance held in Durban, South Africa, in 2001.

The original plan was to send a large delegation and to participate fully in the conference. However, as we reviewed the preliminary documents that would form the basis of the conferenceâs deliberations and its final Declaration, it became clear that antisemitism was not included among the types of 'intolerance' that were to be condemned and eradicated. Rather, the documents demonstrated that criticism of Jews in general and Israel in particular was a fully acceptable mode of expression.

Serious consideration was given to boycotting the conference in view of its antisemitic overtones. In the end, it was decided to send a scaled-down delegation â approximately 45 in number â in hopes that we might have some positive impact, or at least limit the likely antisemitic outcome. Sadly, that was not to be.

The conference was, in fact, two separate events: the official governmental sessions, and a parallel NGO Forum. The governmental meetings proceeded as expected, with hardliners showing very little flexibility in changing the offending language that we opposed, including singling out Israel for harsh criticism.

The NGO meeting was even worse. Very early it became a hate fest aimed directly at Israel. For example, the Protocols of the Elders of Zion was openly available, as well as a book on Israel the Apartheid State that was distributed free of charge. Perhaps the only positive result from Durban for me personally was that I had the good fortune to meet Brenda Katten, who was leading the WIZO delegation. Among her many exceptional activities, she is now a regular Magazine columnist.

Members of the Jewish Caucus, representing Jewish organizations around the world, walked out of the Forum after their proposed language was deleted from the final Declaration while other victim groups were allowed to describe their own victimization in their own way. The deleted language stated:

'We are concerned with the prevalence of anti-Zionism and attempts to delegitimize the State of Israel through wildly inaccurate charges of genocide, war crimes, crimes against humanity, ethnic cleansing and apartheid, as a virulent contemporary form of antisemitism leading to firebombing of synagogues, armed assaults against Jews, incitements to killing, and murder of innocent Jews for their support of the existence of the State of Israel.'

Commenting on the vote against the proposed language from the Jewish Caucus, a member of UN Watch observed, 'It was mob rule. There was no opportunity for Jewish delegates to respond. It was clearly a kangaroo court.'

The final NGO Forum Declaration debased terms like genocide, ethnic cleansing, and crimes against humanity by using them to describe Israeli settlement policies in Judea, Samaria and Gaza (what they called 'the Occupied Territories'). Shockingly, the leaders of so-called human rights NGOs like Human Rights Watch, the Lawyers Committee for Human Rights, and Amnesty International did almost nothing to denounce the activities of the radicals in their midst.

Outside the governmental meetings and NGO Forum, there was a palpable feeling of antisemitism on the streets surrounding the conference venue. Large demonstrations decried all manner of crimes allegedly committed by Jews and Israel. These demonstrations were by no means spontaneous. Participants chanted antisemitic slogans while wearing T-shirts that had been prepared well in advance expressing the wearerâs contempt for the worldâs only Jewish state.

Cartoons fit for the Nazi tabloid Der Sturmer were widely distributed. These caricatures included the time-worn antisemitic tropes of Jews killing babies and Israel destroying the chances for peace.

Street corners provided an opportunity for individual speakers to express their views on the topics of the day. I was especially offended by a Jew, standing arm-in-arm with a Palestinian, brandishing what appeared to be a Chumash while explaining why Israel was an illegitimate country that did not deserve to exist.

For one of the few times in my career, I was unable to maintain my diplomatic faÃ§ade. I shouted that his attempts to ingratiate himself to antisemites would not succeed. 'When they come for the Jews, as they have done so many times before, the person standing next to you will not protect you,' I told him. 'He will not say, âNot him. Heâs a good Jew.â Whether you like it or not, weâre all in this together.'

After a few days, it became clear that we were not accomplishing what we had set out to do, and we did not want to be associated with the inevitable outcome of the conference. We received a call from Washington telling us to pull out of the conference and return home immediately. There began a rapid departure that resembled an emergency evacuation.

We were concerned that our decision to leave prematurely might engender a violent response. As a precaution, we sent armed security officers to the conference site to retrieve any of our delegates who might still be attending meetings. The American delegation was on a bus out of Durban within hours.

I was back on American soil a day after our hasty departure. That Friday evening I was asked to speak at my synagogue about my experiences at the conference. I concluded my remarks by observing how happy I was to return to the safety and security of the United States.

Our report to State Department officials on the conference early the following week was interrupted as we were informed that New Yorkâs Twin Towers had been hit. I watched the smoke rising from the Pentagon and participated in an evacuation for the second time in less than a week, this time from the State Department in Washington.

The Durban conference and the 9/11 terrorist attacks demonstrated that the fates of Israel and the US are inextricably linked. For decades, both countries have stood for freedom and human rights against forces of evil that would return the world to its darkest times. Recent events in Afghanistan notwithstanding, we can only hope that we will continue to work together and maintain our leadership roles in this existential struggle."
Date
September 22, 2021
Title
Recalling the 2001 Durban Conference 20 years later, The Jerusalem Post
Author(s)
Efraim A. Cohen
Original Source
https://www.jpost.com/diaspora/antisemitism/recalling-the-2001-durban-conference-20-years-later-680020
Attachment
Click here to view this article in MS Word/PDF format