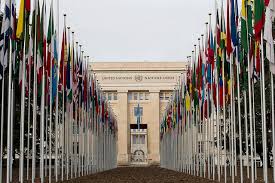 United Nations in Geneva (File photo)
"Ahead of Christmas, the United Nations General Assembly gave the Jewish state a special present. Itâs a gift that keeps on giving â next year, the year after that, and in the years to come. As far as the UN is concerned, Israel can be condemned for eternity. Instead of ribbons, the present came wrapped in strings aimed at strangling the country.

In an unprecedented move, on Thursday, December 23, the General Assembly voted to fund an open-ended war-crimes probe against Israel.

The Commission of Inquiry, or COI, was initially approved in May by the 47-member Geneva-based UN Human Rights Council in the wake of the 11-day war that started when Hamas in Gaza launched rockets, first on Jerusalem and then on much of the rest of the country. Israel responded with Operation Guardian of the Walls.

The COIâs mandate will allow an investigation into any alleged Israeli human rights violations in sovereign Israel, Judea and Samaria (the West Bank) and Gaza. Funding for the probe was approved by 125 member states; the US, Israel and six other countries voted against it, and 34 abstained.

Since no such open-ended investigation has ever been instigated against any other UN member, the probe might itself be considered a declaration of war on the Jewish state by the very body that is meant to preserve world peace.

Hamas, an internationally designated terrorist organization, can get away with murder, from the UNâs viewpoint. Despite the fact that it launched some 4,500 rockets and mortars on Israel during the May war â and has launched tens of thousands of rockets on Israeli civilians over the years â Hamas got off with barely a second glance at its actions, let alone an ongoing inquiry.

Hamas and Palestinian Islamic Jihad, its smaller partner in crime, remain free to carry out terror attacks and rocket attacks with impunity. The message this gives their Iranian sponsor and Iranâs other proxies, including Hezbollah in Lebanon, is clear. A green light for terrorism, a red light for fighting back. Evidently Hamasâs use of human shields to fire rockets indiscriminately at Israeli citizens does not count as a war crime if youâre sitting in the peace and quiet of a UN office, a world away from sirens warning of incoming missiles.

It is often said that the UN is not an independent body but the sum of its member states. No wonder Israel is damned so often. As the late foreign minister and former UN envoy Abba Eban once concluded using his wonderful way with words, 'If Algeria introduced a resolution declaring that the Earth was flat and that Israel had flattened it, it would pass by a vote of 164 to 13 with 26 abstentions.'

Despite the progress made between Israel and the Arab world within the framework of the Abraham Accords, it doesnât change the fact that there are more than 50 Muslim-majority member countries in the United Nations and only one Jewish state. The US is Israelâs traditional ally, although Israelis remember Barack Obama allowing an anti-Israel motion to pass as a parting shot before handing over the presidency to Donald Trump. Apart from America, Israelâs firm friends in the UN are small countries without much clout, including the Marshall Islands, Micronesia, Nauru, Palau and Papua New Guinea. Hungary also voted against the probe. They should be praised for having the courage to stand up in Israelâs favor.

The UN tries hard to present an image of being fair and unbiased when it comes to the Israel-Palestinian conflict, but it canât help itself. After the murder of 25-year-old Israeli Yehuda Dimentman in a terrorist ambush this month, UN Special Coordinator for the Middle East Peace Process Tor Wennesland, issued a statement saying he was 'alarmed by the escalating violence in the occupied West Bank, including east Jerusalem, which is claiming the lives of Israelis and Palestinians.'

All the Palestinian fatalities Wennesland referred to were the terrorist perpetrators of the attacks. According to UN warped moral equivalence, their deaths were to be mourned along with the deaths of their victims.

One of the functions of the special coordinator is to prepare reports and brief the UN Security Council on Israel every three months, ensuring the spotlight remains constantly on the country and its alleged crimes, no matter what else is happening in the world. The UN maintains a body with the mouthful of a name the Committee on the Exercise of the Inalienable Rights of the Palestinian People, and every November 29, the UN marks an 'International Day of Solidarity with the Palestinian People.' The day reflects the date when the UN adopted the Partition Resolution in 1947.

I donât think the world body has ever forgiven itself for allowing Israel to become a sovereign state more than 70 years ago. The Arab rejection of the UN partition plan and the expulsion of some 800,000 Jews from Arab lands play no part in the narrative of the Palestinians as perpetual victims.

Over the years, I have often proposed what I call the I-P Test of world hypocrisy: Instead of 'Israel' and the 'Palestinians,' think of India and Pakistan. Nobody today queries Indiaâs right to exist. The UN doesnât fixate on its faults the way that the United Nations Human Rights Councilâs Agenda Item 7 mandates that the UNHRC debate 'Israeli human rights abuses against the Palestinians' during each of its sessions. And there is no separate body and budget whose only purpose is to keep Pakistanis who fled India as permanent refugees, like UNRWA (the United Nations Relief and Works Agency for Palestine Refugees in the Near East).

Former Soviet dissident Natan Sharansky developed what he called the â3D Testâ to help distinguish legitimate criticism of Israel from antisemitism. The triple Ds are: Demonization, Double Standards, and Delegitimization. The UN, to its shame, is guilty of all three. Worse still, while it singles out Israel for its alleged crimes, it all but ignores the behavior of leading human rights abusers including North Korea, China and Iran, the country where womenâs rights are severely restricted, homosexuals are executed and minors can be legally hanged...

As we enter 2022, amid the ongoing corona pandemic, there is only one thing that can be relied on: The UN will continue to go through the motions of condemning antisemitism while singling out the one Jewish state. So much for New Yearâs resolutions."
Date
December 30, 2021
Title
The U.N.âs perpetual, painful probe, The Jerusalem Post
Author(s)
Liat Collins
Original Source
https://www.jpost.com/opinion/article-690211
Attachment
Click here to view this article in MS Word/PDF format