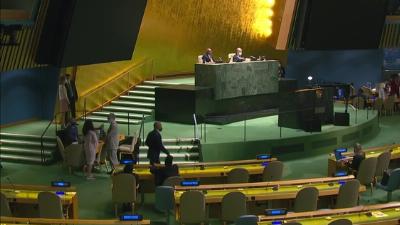 UN General Assembly Meeting to Commemorate the 20th Anniversary of the Adoption of the Durban Declaration and Programme of Action, Sept. 22, 2021
"âThe United Nations is a place where lies are told.â Those were the words of American U.N. Ambassador Daniel Patrick Moynihan speaking to the General Assembly on Nov. 10, 1975, after it adopted a resolution declaring the self-determination of the Jewish people, Zionism, to be a form of racism. As this yearâs General Assembly opening draws to a close, Moynihanâs words ring truer than ever.

On Sept. 22, 2021, the General Assembly restated that falsehood. This time, though, 38 countries , including the United States, voted with their feet and boycotted the place where lies are told.

The context was an all-day affair convened by the General Assembly to mark the 20th anniversary of the U.N.âs racist âanti-racistâ world conference, originally held in Durban, South Africa, in 2001.

Palestinians and their U.N. allies believed that racial politics in the U.S. presented a unique opportunity. The boycott of âDurban IVâ spoiled the party but also revealed a chasm in President Joe Biden's foreign policy.

The object of veneration, the Durban I conference, was a global antisemitic hate-fest that ended three days before 9/11, a world conference where Yasser Arafat and Fidel Castro lectured humanity about human rights protection and members of so-called civil society roamed the streets carrying signs reading, âFor the liberation of Quds, machine-guns based upon FAITH and ISLAM must be used.â

The Durban Declaration that emerged from the 2001 gathering replicated the deceit that Palestinians were victims of Israeli racism. The only state denounced under the U.N. banner of combating discrimination was the Jewish state.

Prior to this ignominious conclusion, the U.S. and Israel had walked out, and both nations have consistently refused to legitimize Durbanâs message. The U.N. did the opposite, with High Commissioner for Human Rights Navi Pillay manufacturing Durban II and III follow-up conferences.

In the lead-up to Durban IV, U.N. WebTV and U.N. presses were filled with reports of American racism, which had allegedly rotted Americaâs constitution and despoiled its soul. The General Assembly then decided to mark the 20th anniversary with the theme of âpeople of African descent.â

Palestinians took to rewriting their history zealously in the image of African Americans. At Durban IV, spokesman Riad al-Maliki conjured up every form of cultural appropriation and historical revisionism he could invent about his âAfrican brothers and sisters,â âprivilege,â and âapartheid.â

No matter that Arabs in Israel, one-fifth of the population, have more democratic rights and freedoms than in any Arab state, an Islamist party is part of Israelâs governing coalition, and Arabs volunteer in the Israel Defense Forces, sit on Israelâs Supreme Court, and represent Israel as ambassadors.

By contrast, Palestinian leader Mahmoud Abbas openly embraces apartheid for Palestine. In his words , âIn a final resolution, we would not see the presence of a single Israeli â civilian or soldier â on our lands,â so as to ensure his nation is not defiled by âtheir filthy feet .â Official Palestinian policy and practice is to pay Palestinians who kill Jews.

The theme of Durban IV, however, encouraged Palestinian Arabs to pretend to have more in common with African American victims of slavery than the Arab masters of the trans-Saharan or East African slave trade.

Iranian Foreign Minister Amir Hossein took his Durban invitation as a chance to promote genocide and announced, âMy nationâs willpower is dedicated to the total elimination of all forms of racial discrimination, including apartheid and Zionism.â

Durban deceits were not only about Jews. Durban IV featured human rights reprobate Saudi Arabia, representing 54 Asian states, claiming, âWe reaffirm our belief, as we have always, in the importance of spreading a counsel of peace and dialogue among civilizations, highlighting tolerance and respect for diversity.â China contributed : âChina believes in a culture of respect, tolerance, and equality, and a social environment free from discrimination.â

While the current plight of Africans sold into slavery and perishing in ethnic conflicts was snubbed, the U.N. handpicked nongovernmental speakers who trashed the U.S. as well as Israel.

Durban IV culminated in the General Assemblyâs adoption of a âpolitical declaration â reaffirming the Durban Declaration and demanding its âfull implementation.â

The good news is that the worldâs major democracies and economic engines boycotted the event, specifically because the demonization of Israel was recognized as a form of modern antisemitism.

The bad news is that the U.N. Human Rights Council has named Durban champion Pillay to lead its newly created mother of all anti-Israel investigations â a permanent inquiry on the racial and religious root causes of the Israeli-Palestinian conflict.

And the worst news, trumpeted by Biden in his maiden speech to the General Assembly, is his decision to rejoin the U.N. Human Rights Council, a foreign policy that legitimizes the stronghold of antisemites while professing to delegitimize antisemitism.

Moynihan bemoaned âthe realization that if there were no General Assembly, this could never have happened.â Ditto the outrages of Durban I, II, III, and IV. Instead, the instruments of hate have found shelter and sustenance inside a behemoth erected for their demise."
Date
October 7, 2021
Title
The United Nations endorses antisemitism, The Washington Examiner
Author(s)
Anne Bayefsky
Original Source
https://www.washingtonexaminer.com/opinion/op-eds/the-united-nations-endorses-antisemitism
Attachment
Click here to view this article in MS Word/PDF format