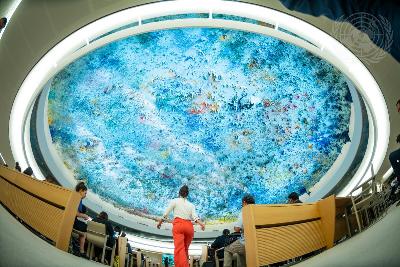 The U.N. Human Rights Council (UN Photo)
"Maya Angelou said, âWhen people show you who they are, believe them the first time.â The antisemitic remarks made by a UN Commissioner in an interview this week are yet one more example of the UN Human Rights Council (UNHRC) showing its true colours and abandoning the moral foundations on which it was established.

In May 2021, in the wake of the self-defensive war Israel was forced to wage against Hamas (a listed terrorist entity in Canada), the UNHRC resolved to conduct an unprecedented, open-ended Commission of Inquiry (COI) to investigate âall alleged violations and abuses of international human rights lawâ by Israel in its territories. The COIâs membership includes Miloon Kothari.

In an interview with the notorious anti-Israel outlet Mondoweiss earlier this week, Commissioner Kothari promoted antisemitic conspiracy theories, referring to the âJewish lobby,â which, he claims, controls social media. He also exposed unmistakable bias against Israel and revealed that he has already determined Israelâs guilt on issues yet to be investigated, making accusations of âapartheid,â questioning Israelâs membership in the United Nations, and echoing classic anti-Israel tropes, such as âfrom the river to the sea,â that call for the destruction of the Jewish state.

These remarks were made in the context of a half-hour recorded interview. This removes any possible question as to whether Kothari was quoted out of context, as subsequently suggested by COI Chair Navi Pillay, whose record on Israel is similarly problematic.

Equally disturbing, Kothari went even further and sought to deny the Jewish people the right to define what hatred against them looks like, noting that the Commission of Inquiry of which he is a member would âtackle this issue of how far you can take antisemitism.â

Kothariâs remarks do not exist in a vacuum. There is a direct and frightening impact on Canadian Jews who, last spring, found themselves the target of antisemitic violence in the streets of Montreal and Toronto. These assaults were the results of a concerted propaganda war waged on social media by the strategic allies of those who directed missile attacks from Gaza against the civilian residents of Jerusalem and Tel Aviv.

Canadians know perfectly well that the words âJews control the mediaâ do not mean something different when spoken by a white-supremacist leader or a UNHRC Commissioner. The viewpoint represented by this language is toxic â all the more so because, in this case, it carries the implicit imprimatur of the worldâs best-known international human rights organization.

It is for this reason that Kothariâs remarks have been condemned by democracies around the world. Canadaâs Ambassador to the UN Bob Rae stated that âblatantly biased, anti-semitic comments are completely unworthy of the UN, the UN Human Rights Commission, and are a disgrace to institutions supposedly dedicated to the rule of law.â

But the problems with this COI go far deeper than the remarks of a lone commissioner.

In a process closed to public oversight, the Commissioners selected to lead the investigation each turned out to hold their own biases towards Israel, in contravention of the UNâs own guidelines, which explicitly state that all Commissioners must have âa proven record of independence and impartiality.â Specifically, these guidelines reference âprior public statementsâ as a relevant factor that could affect commissionersâ âindependence or impartiality,â or create a âperception of bias.â Kothariâs colleagues Navi Pillay (chair) and Chris Sidoti have long and documented histories of anti-Israel biases, including justifying, minimizing, and, in some cases, completely ignoring Palestinian terrorism.

The easy fix for addressing Kothariâs egregious remarks would be to remove him from his role. However, the COI is rotted to its very core, and Kothariâs remarks are but a symptom of that decay. To address its failings, Canada and other UN Member States must continue to speak out, as they so rightly have already, and to call for a disbandment of the COI and a review of why the UNHRC flouted UN guidelines on impartiality.

Only once the root of the problem is addressed can UNHRC inquiries and resolutions be taken seriously."
Date
August 5, 2022
Title
U.N. antisemitism shows its face, yet again, The Toronto Sun
Author(s)
Gail Adelson-Marcovitz
Original Source
https://torontosun.com/opinion/columnists/opinion-un-antisemitism-shows-its-face-yet-again
Attachment
Click here to view this article in MS Word/PDF format