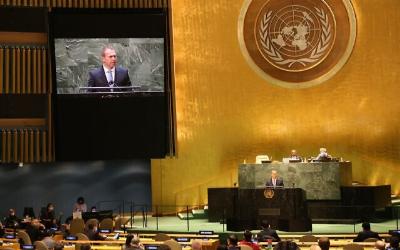 Israelâs Ambassador to the UN Gilad Erdan introducing the resolution, January 20, 2022. (Photo courtesy Israelâs Mission to the UN)
"The United Nations General Assembly adopted a resolution aimed at combating Holocaust denial on Thursday, in what was just the second time since Israelâs establishment that a measure its delegation brought before the forum managed to pass.

The resolution provides a specific classification for Holocaust denial, using the working definition put together by the International Holocaust Remembrance Alliance. It also provides actions expected to be taken by signatory countries in order to address the phenomenon, and demands social media networks remove posts that fall under the IHRA definition.

One hundred and fourteen countries cosponsored Resolution A/76/L30 and only Iran publicly voiced its opposition. The representative from the Islamic Republic â whose leaders have a long history of Holocaust denial â claimed the resolution marked another attempt by Israel 'to exploit the suffering of Jewish people in the past as cover for the crimes it has perpetrated over the past seven decades against regional countries.'

However, because Tehran has failed to pay its UN membership dues, its delegation has been stripped of some of its rights, and it was therefore unable to call for a formal vote on the Israeli resolution. As a result, the initiative was approved by consensus.

In an impassioned speech introducing the resolution, Erdan said that 'Holocaust denial has spread like a cancer. It has spread under our watch. It has spread because people have chosen to be irresponsible and to avoid accountability.'...

In a briefing with reporters earlier this month, Erdan acknowledged that like all GA resolutions, this latest one will not come with an enforcement mechanism. However, he expressed hope that by setting a new âinternational standardâ for what constitutes Holocaust denial and how social media companies are expected to act in response, the resolution will have significant ramifications on the discourse moving forward.

It was the first time a resolution introduced by Israel was adopted by the General Assembly since 2005, when the body passed an Israeli resolution declaring January 27 â the anniversary of the liberation of the Auschwitz death camp â as International Holocaust Remembrance Day."
Date
January 20, 2022
Title
U.N. General Assembly adopts Israeli resolution aimed at combating Holocaust denial, The Times of Israel
Author(s)
Jacob Magid
Original Source
https://www.timesofisrael.com/un-general-assembly-adopts-israeli-resolution-aimed-at-combating-holocaust-denial/
Attachment
Click here to view this article in MS Word/PDF format