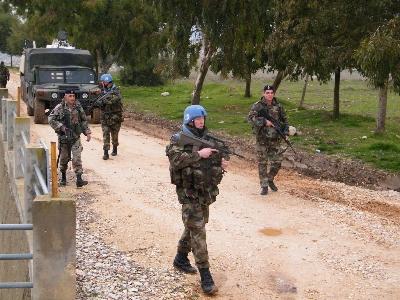 UNIFIL patrol (File photo courtesy Wikimedia Commons)
"The UN's mission in Lebanon called Sunday for the country's military to guarantee the security of its peacekeepers, alleging personnel were 'threatened' by armed men the day before.

The United Nations Interim Force in Lebanon (UNIFIL) has long been deployed in the country's south -- a stronghold of the powerful Shiite movement Hezbollah -- to maintain a barrier with Israel, as the two countries technically remain at war.

A routine UNIFIL patrol was confronted on Saturday by 'a group of men in civilian clothes' near the Arab al-Louaize district in southern Lebanon, force spokesperson Andrea Tenenti said in a statement.

The men 'threatened the soldiers and tried to take their weapons', he said.

'Attacks, threats and acts of intimidation against UNIFIL peacekeepers... are a matter of serious concern, and we call on the Lebanese armed forces to guarantee the safety, security and freedom of movement' of the UN force, he said in a statement..."
Date
June 12, 2022
Title
U.N. In Lebanon Demands Security Guarantees After Troops ‘Threatened’, Barron's
Author(s)
AFP
Original Source
https://www.barrons.com/news/un-in-lebanon-demands-security-guarantees-after-troops-threatened-01655061907?tesla=y
Attachment
Click here to view this article in MS Word/PDF format