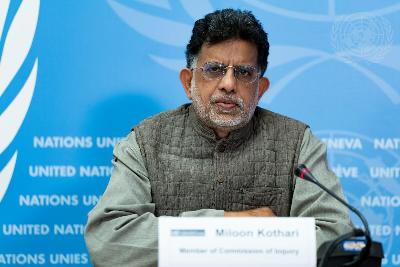 Miloon Kothari (File photo courtesy U.N.)
"UN investigator Miloon Kothari apologized on Thursday for his comment that social media was largely controlled by the Jewish lobby, and emphasized that he had not meant to question Israelâs status as one of the organizationâs 193 member states.

âIt was completely wrong for me to describe the social media as being controlled largely by the Jewish lobby,â Kothari said in a letter he wrote to UN Human Rights Council President Federico Villegas. âThis choice of words was incorrect, inappropriate, and insensitive.â

His apology came 10 days after The Jerusalem Post reported Kothari had spoken of the Jewish lobby to the Internet site Mondoweiss in a podcast that accompanied a July 25 article. Mondoweiss had not included the Jewish lobby quote in its article based on the podcast.

Kothari is one of three members of the UNHRCâs permanent Commission of Inquiry into alleged Israeli human-rights abuses.

âWe [the COI on Israel] are very disheartened by the social media that is controlled largely by â whether it is the Jewish lobby or specific NGOs,â Kothari told Mondoweiss, adding that âa lot of money has been thrown into trying to discredit us.â

Last Friday, Villegas asked Kothari to clarify his remarks to Mondoweiss, noting that they âcould reasonably be interpreted as the stigmatization of the Jewish people, which, as all are aware, is at the heart of any expressions of antisemitism.â

At least 18 countries, including the US, have disavowed Kothariâs remarks as antisemitic, as has the European Union and the office of UN Secretary-General Antonio Guterres.

âThe offense I have caused by using these words has deeply distressed me,â Kothari said in his letter. âI pride myself on my work as a human rights activist and defender. My entire career has been dedicated to fighting discrimination, inequality, and injustice and I stand by these ideals. I, therefore, take with the utmost seriousness concerns that my words were perceived and experienced to be antisemitic.â

Kothari said his intention had been âto denounce the relentless and vitriolic personal attacks against the members of the commission on social media and some publications, launched to delegitimize and undermine its work. I have always condemned discrimination in all its forms, including through antisemitism, and I do so again now. I warmly welcome and fully support the UNâs commitment to combating antisemitism and its efforts in this regard anchored in human rights.â

Kothari also apologized for his comment to Mondoweiss about Israelâs status as a UN member. When he had been asked by Mondoweiss if it was his opinion that Israelâs occupation of the Palestinians was illegal, Kothari responded: âYes. Itâs been illegal from the beginning. In fact, one of our mandates is to look at the role of both humanitarian law, human rights law, criminal law. And on all three counts, Israel is in systematic violation of all the legislation.

âAnd in fact, I mean, I would go as far as to raise the question as why are they even a member of the United Nations, because they donât respect â the Israeli government does not respect its own obligations as a UN Member State. They, in fact, consistently, either directly or through the United States, try to undermine UN mechanisms.â

Kothari cited the COI report submitted to the UNHRC in June, which said: âThe foundations for the legality of the State of Israel, alongside that of the State of Palestine, were laid out by General Assembly resolution 181 and are not and never will be in question by this Commission.â

Kothari: Israeli occupation 'illegal from the beginning' In his letter to Villegas, Kothari said: âI did not intend to suggest that Israel should be excluded from the United Nations. I realize that this choice of words has also caused offense and sincerely regret it.â

Israelâs ambassador to the UN in Geneva, Meirav Eilon Shahar sent a letter on Thursday to Villegas in which she rejected the apology. She said it was a poorly-disguised attempt to deflect criticism and called on the UNHRC to disband the entire COI.

âHis letter is a transparent ploy to deflect the criticism he has come under... This dark episode of the Human Rights Council demonstrates the deeply-rooted prejudices held by the Commission of Inquiry and its Commissioners against Israel and the Jewish People,â she wrote.

âIt also highlights the many problems... previously raised about this COI, which is composed of biased activists who were given an unlimited and unprecedented mandate to attack Israel.

âIf the United Nations is committed to its own standards of independence and impartiality, and if it is sincere in its fight against antisemitism, you must firmly act.

âTherefore, the State of Israel continues to call for the resignation of all three compromised Commissioners, as well as the disbanding of this COI.â

Emmanuel Nahshon, Foreign Ministry Deputy Director-General for Public Diplomacy, said, âthe so-called apologyâ is âa pitiful and unconvincing maneuver, which does not cover up for a long record of anti-Israeli and antisemitic statements by [Kothari] and the other COI members. They should immediately resign.â

The COI on Israel had generated controversy even before Kothariâs Jewish lobby remark, particularly given its intention to investigate Israel for the âcrime of apartheid.â

Its critics have charged that its objective is to set the groundwork to dismantle Israel as an ethnic nationalist homeland for the Jewish people. Its supporters have viewed it as an essential tool to uncover the racism that they feel is intertwined with Israelâs treatment of the Palestinians.

There are about 10 UNHRC-linked investigatory committees and fact-finding missions examining alleged human-rights abuses in Nicaragua, Libya, Venezuela, Myanmar, the Congo and South Sudan. Four of those panels considered to be an Independent Commission of Inquiry cover Israel, Ukraine, Ethiopia and Syria.

What is the COI?

The COI on Israel is the only one in that grouping with no set termination. It is a permanent committee, and its three investigators â Kothari, Navi Pillay and Chris Sidoti â can serve until they decide to reside, given that there is no end date for their term of service.

The COI already delivered one report to the UNHRC in June, and is expected to publish a second one in September for delivery before the UN General Assembly.

Known formerly as the UN Independent International COI on the Occupied Palestinian Territory, including East Jerusalem, and in Israel, its members are tasked with operating on both sides of the Green Line, specifically with investigating âall underlying root causes of recurrent tensions, instability and protraction of [the Israeli-Palestinian] conflict, including systematic discrimination and repression based on national, ethnic, racial or religious identity.â

Pro-Israel NGOs that had always objected to the COI rejected Kothariâs apology as insincere. They called for his resignation and for the COI itself to be disbanded.

UN Watch executive director Hillel Neuer said his NGO had rejected Kothariâs âattempt to whitewash his use of a notorious antisemitic trope that throughout history has sparked deadly pogroms and worse, and his literal questioning of Israelâs membership in the UN. Mr. Kothari is the first UN investigator in the history of the United Nations to be called out for antisemitism by the head of the Human Rights Council, the Secretary-General, together with Britain, France, Germany, the US and 14 other countries.â

Among the countries that had spoken out against Kothariâs remarks were Australia, Austria, Belgium, Brazil, Canada, the Czech Republic, Guatemala, Hungary, Italy, Israel, the Netherlands, Norway, Sweden and Switzerland.

âThe only âsaving graceâ is that Kothari staying on will be a permanent reminder of the Councilâs complete absence of impartiality, competence or even shred of respect,â said International Legal Forum CEO Arsen Ostrovsky.

Pro-Palestinian NGOs had expressed their support for Kothari prior to his apology, and said the attacks against him were part of an ongoing attempt to discredit the COI.

Ramallah-based Al-Haq said it âextends its full support and pledges its ongoing cooperation with the UN Commission of Inquiry on Palestine, which since its establishment has been under attack by unfriendly Third States, alleging its mandate and work as âbiased,â âdisproportionateâ and âanti-Semitic.â The attacks on the COI will only further perpetuate impunity for Israeli crimes. We call on Third States & civil society to support and engage in good faith with the CoI to enable it to continue with its work unhindered.â"
Date
August 4, 2022
Title
U.N. investigator apologizes for Jewish Lobby remark, The Jerusalem Post
Author(s)
Tovah Lazaroff
Original Source
https://www.jpost.com/diaspora/antisemitism/article-713941
Attachment
Click here to view this article in MS Word/PDF format