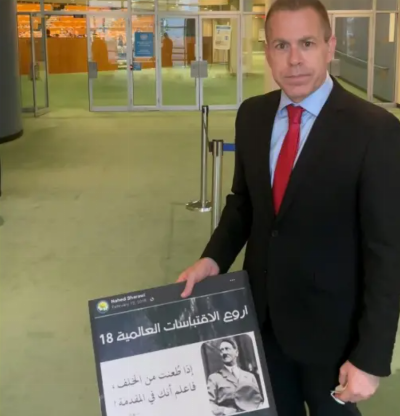 Ambassador to the U.N. Gilad Erdan with a picture showing an antisemitic social media post by an UNRWA teacher (Photo courtesy Spokesman for Ambassador Erdan)
"UN security personnel stopped Israel's Ambassador to the UN Gilad Erdan from bringing a display poster into the General Assembly on Monday showing a social media post by a UNRWA teacher which glorified Hitler.

He had meant to display the post during a discussion on the United Nations Relief and Works Agency for Palestine Refugees so that he could illustrate his concern about the problem of incitement in UNRWA schools.

'I am shocked because I brought here with me a photo of a UNRWA teacher's post glorifying the most horrific mass murderer in history, Adolf Hitler,' Erdan said. 'Unfortunately, shockingly, I was prevented from bringing in this photo in order to share this proof with the other distinguished ambassadors here.'...

Erdan, in addressing the UNGA, said that his attack on UNRWA was factual and not political.

'UNRWA is part of the problem, not the solution â and the time has come for the International community to hold it accountable.'"
Date
October 5, 2021
Title
U.N. prevented Erdan from displaying pro-Hitler posts by UNRWA teacher, The Jerusalem Post
Author(s)
Tovah Lazaroff
Original Source
https://www.jpost.com/arab-israeli-conflict/un-prevented-erdan-from-displaying-pro-hitler-posts-by-unrwa-teacher-681064
Attachment
Click here to view this article in MS Word/PDF format