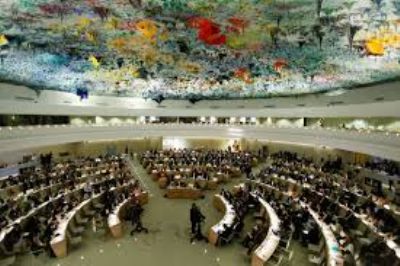 The United Nations Human Rights Council (File photo)
"In a world turned upside down, where right and wrong are based on whomever has the loudest voice and the strongest propaganda machine, attacks on democracies and fundamental human rights are becoming commonplace. The decline of democracies and the growing power of totalitarian dictatorships means that countries that are antithetical to freedom and human dignity have ever-increasing power in international organizations.

Last week, Israelâs ambassador to the United Nations, Gilad Erdan, criticized the UN Human Rights Council (UNHRC) for its well-documented disproportionate condemnation of Israel. In an impassioned speech to the General Assembly, he tore up the organizationâs annual report and called out the UNHRCâs 'obsessive anti-Israel bias.'

'Since the establishment of the council 15 years ago, it has decided to blame and condemn Israel not 10 times like Iran or 35 times like Syria,' said Erdan. 'The Human Rights Council has attacked Israel with 95 resolutions compared to 142 against all other countries combined.'

No state should be immune to criticism, but the sheer bias and hypocrisy of the United Nations and its affiliate agencies diminishes the organizationâs credibility...

An attack on the only democracy in the Middle East is an attack on anyone who cherishes the very principles of freedom and democracy. No other country on earth is put under the magnifying glass in as much as Israel is by the United Nations and its affiliate agencies. No other country is on the permanent agenda of the UNHRC and discussed ad nauseam and investigated relentlessly.

Even the UN-affiliated International Criminal Court relented to Palestinian propaganda by saying it would investigate the Jewish state for alleged war crimes. Yet the same court is refusing to launch a war crimes investigation against Syrian President Bashar Assad, despite documented evidence of his complicity in the gassing and murder of children, women and men during the decade-old civil war in that country...

The UN has become a political instrument for Israelâs enemies and detractors. And because democracies represent a minority of nations within the organization, their voices have been consistently diminishing. This threatens the very essence of the UN Charter and must be immediately addressed if we are to make the world a better place for everyone."
Date
November 5, 2021
Title
Undemocratic states have hijacked the U.N. agenda, National Post
Author(s)
Avi Benlolo
Original Source
https://nationalpost.com/opinion/avi-benlolo-undemocratic-states-have-hijacked-the-un-agenda
Attachment
Click here to view this article in MS Word/PDF format