UNRWA doesn't need more funding, it needs to be shut down 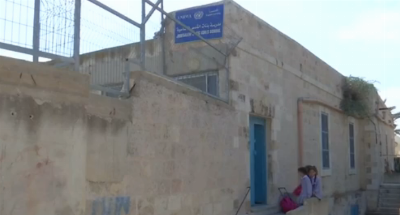 An UNRWA building (File photo)
"The Hashemite Kingdom of Jordan and the Swedish government are convening an international ministerial conference in Brussels on Tuesday regarding UNRWA, the United Nations Relief and Works Agency.

According to its own website, 'The purpose of the conference is to strengthen the mutual responsibility of UNRWA and the international community to protect the rights and enhance the human development of the Palestine refugees, by providing the Agency with the financial stability and predictability of funding it requires to fully and effectively implement its United Nations General Assembly mandate.'...

Organizations, including IMPACT-se and Palestinian Media Watch among others, have extensively researched the textbooks and education system in UNRWA-run schools and found clear support of terrorism and the cult of martyrdom. There have also been acknowledged cases of Hamas creating terror tunnels and weapons stores under UNRWA schools in Gaza, using the children as human shields...

UNRWA has not solved the 'refugee problem.' On the contrary, it has created a bigger one than ever before. While some 726,000 Arabs originally fell under the agencyâs auspices in 1949, the number more than 70 years later now stands at 5.7 million â almost eight times as many. In other words, it has added to the refugee problem and, at the same time, perpetuated the conflict between Israel and the Palestinians.

Instead of getting on with their lives, the Palestinians in places like Gaza, with UNRWAâs encouragement, continue to grasp a false dream of one day 'returning' to Jaffa, Haifa, Safed or Jerusalem. Far from transforming refugees into self-sufficient individuals, the agency has fostered dependency and a culture of entitlement. It is this that the donor countries are now being asked to fund with even greater sums of money than before.

If, after 70-plus years, the Palestinian refugees still need more help than any other group of refugees, such as those struggling to enter Europe in the humanitarian crisis along the Polish-Belarus border, then UNRWA has clearly failed."
Date
November 14, 2021
Title
UNRWA doesn’t need more funding, it needs to be shut down – editorial, The Jerusalem Post
Author(s)
Jerusalem Post Editorial
Original Source
https://www.jpost.com/opinion/unrwa-doesnt-need-more-funding-it-needs-to-be-shut-down-editorial-684993
Attachment
Click here to view this article in MS Word/PDF format