U.N.'s decision on advisory opinion on Israeli 'occupation' is hypocrisy 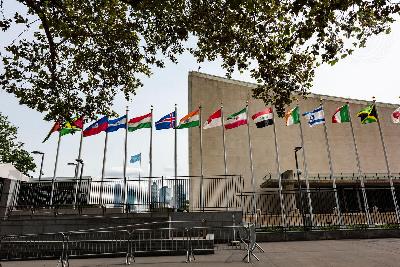 UN Headquarters (UN Photo)
"Despite intensive diplomatic efforts by Israel, the UN General Assembly on Friday decided to seek an advisory opinion from the International Court of Justice at The Hague on the legal consequences of Israelâs âoccupation, settlement, and annexation of Palestinian territory.â

It could take years before the ICJ reaches a decision, and its opinions are non-binding, but Israel cannot be complacent about the process. Such a ruling in The Hague could be used by the UN and other international bodies and would have a diplomatic and economic impact...

It is a dangerous move that is far from solving the Israeli-Palestinian conflict and is likely to further inflame it, giving the Palestinians no incentive to sit down and negotiate in good faith.

Furthermore, the UN and ICJ are making a mockery of their own mandates and are being hijacked by the Palestinians. This is similar to the open-ended UN Commission of Inquiry into Israel headed by Navi Pillay.

The Palestinian push for the ICJ ruling is part of its ongoing lawfare against Israel. The court must avoid giving the impression of built-in bias against Israel when choosing the panel it appoints...

At the same time, Israelâs right to Jerusalem and much of the larger settlement blocs is a consensus issue in the country. Israelâs identity as the Jewish state is under attack when its rights to its holiest sites are called into question.

This would be a good time for the Left and Right to set aside their differences and unite around the literal common ground and find a pragmatic path that ensures Israelâs basic rights without completely alienating the international arena.

And Israel and all who truly value human rights must call out ongoing UN hypocrisy in obsessively singling out the Jewish state through distortions and lies."
Date
January 2, 2023
Title
UN’s advisory board on Israeli ‘occupation’ is hypocrisy, The Jerusalem Post
Author(s)
Jerusalem Post Editorial
Original Source
https://www.jpost.com/opinion/article-726370
Attachment
Click here to view this article in MS Word/PDF format