Why are American taxpayers helping to pay for âPillayâs Pogrom?â 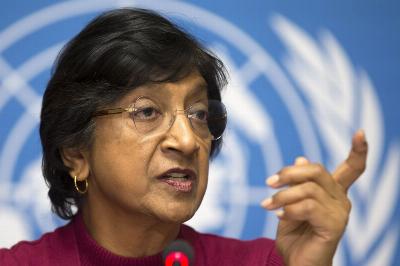 Navi Pillay (File photo)
"At the end of December 2021, the United Nations General Assembly decided to bankroll a full-fledged Star Chamber directed at Israel and its supporters. Chaired by former U.N. High Commissioner for Human Rights Navi Pillay, the short title is âPillayâs Pogrom.â The U.S. will now pick up 22% of the tab â because thatâs how the Biden administration does business.

Every one of the three members of the so-called âindependent commission of inquiryâ has a demonstrable record of anti-Israel animus and bias.

From that starting point, Pillayâs Pogrom has four goalposts.

First, label Israel â and its supporters from around the world â guilty of apartheid or aiding and abetting this crime against humanity.

Notwithstanding that Arabs are part of the countryâs governing coalition, sit on the Israeli Supreme Court, serve as Israeli Ambassadors, and have more rights and freedoms than Arabs in any Arab state. Plus, pile on guilty verdicts on a bunch of other phony charges.

Second, as criminal actors, Israelis and supporters need to be hunted down, prosecuted and imprisoned. The International Criminal Court awaits. Third, the countryâs economy needs to be demolished through boycotts, divestments, and sanctions, akin to apartheid South Africa. And fourth, a full-fledged arms embargo needs to be mounted to ensure Israeli self-defense is not an option.

The first formal report of this inquisition is due out in June 2022. Two reports have been commissioned per year â forever.

Faced with this recipe for emasculating the Jewish state â quintessential modern antisemitism â the U.S. voted against funding it.

So how are U.S. taxpayers on the hook?

The vote in the General Assembly in late December was eight on the side of Israel, including the U.S., 125 against, and 34 abstentions. The money is to come from the U.N. âregular budget.â The U.S. proportion of the regular budget is a fixed number, namely, 22 percent. And the U.N. formula is lost, then pony up regardless.

In the past, when the U.N. has decided to fund various anti-Israel endeavors, the president â with the assistance of Congress â has deducted and withheld the proportionate American contribution from its total U.N. dues. Footing the bill for actions so obviously discriminatory and reeking of anti-Semitism has been deemed diametrically opposed to this countryâs values by both sides of the aisle. The expiration of the current continuing resolution in February, and the anticipated final appropriation bill or bills for the remainder of the fiscal year 2022, present a defunding opportunity.

To date, the Biden administration is marching to a different drummer.

On January 1, 2022, it joined the U.N. Human Rights Council. It has even justified legitimizing this bastion of anti-Semitism â the undeniable result of American membership â as a means to help Israel. âHelpâ no one recalls Israel requesting. Israel does not participate in the Council, where showing up for the firing squad seems ill-advised. There are 47 members of the Council, most of which are not even free democracies. Today, Islamic states hold the balance of power. So, team Biden moves the Israel-bashing needle two percent.

The democratic state of Israel, governed by the rule of law, has no chance of being elected to the U.N. Human Rights Council. But in the U.N. âhuman rightsâ world, China, Cuba, Eritrea, Libya, Qatar, Russia, Somalia, and Venezuela? No problem. They are all current members of the U.N.âs top human rights body.

The Bush administration stayed off the Council, while the Trump administration was saddled at the beginning with an Obama administration holdover seat and eventually quit after they figured out âreformâ was a numbers game they couldnât win. And both GOP administrations withheld funding on the grounds that bolstering the images of human rights abusers and anti-Semites was not the equality-look they were going for. The Council didnât have a monopoly on avenues for improving international human rights protection and it was incumbent upon the U.S. and others to find and empower alternatives. The Biden administration, however, has another calculus. It figures playing nice works with shameless scoundrels and paying them for the privilege of occupying a seat at their table is merely how the U.N. sport works.

That reasoning leaves American taxpayers footing the bill for the âInquiryâsâ political mugging. Approximately $2.5 million to start and at least one million every year thereafter â in perpetuity. So here is what your money now buys.

A whopping eighteen new full-time staff permanently ensconced at the Office of the U.N. High Commissioner for Human Rights peddling the evil-Israel narrative. The creation of an in-house U.N. law department of at least five lawyers plying their trade against Israeli evildoers and accomplices. A travel budget for the whole gang that translates into three inquisitors provided food, accommodation and airfare to roam around demonizing the Jewish state every day of every year. (More than any of the Councilâs current human rights inquiries about anything, anywhere.)

Hence, Americans face some questions about dollars and cents â that are equally applicable to decent people the world over.

Are you willing to pay for this repugnant assault on the human rights of Jews? And on the rights and freedoms of Israelis to defend themselves and flourish, despite seven decades of hate and violence from their neighbors?

Allowing the U.N. to attack the intelligence and the pocketbooks of Americans of all walks of life is not how we should be starting 2022."
Date
January 3, 2022
Title
Why are American taxpayers helping to pay for âPillayâs Pogrom?â, JNS.org
Author(s)
Anne Bayefsky
Original Source
https://www.jns.org/opinion/why-are-american-taxpayers-helping-to-pay-for-pillays-pogrom/
Attachment
Click here to view this article in MS Word/PDF format