Zelensky is right: The United Nations is useless 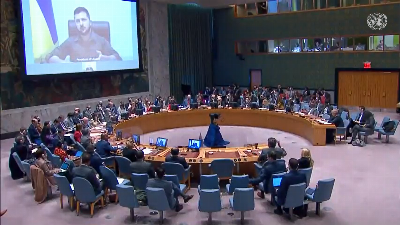 Ukrainian President Volodymyr Zelensky addressing the U.N. Security Council, April 5, 2022 (Screenshot)
"Ukrainian President Volodymyr Zelensky gave voice to a terrible truth in his UN speech Tuesday: The United Nations is an utter failure. If the organization wonât actually work to end Russiaâs Ukraine war, he said, it should dissolve itself.

'Are you ready to close?' he asked the assembled dignitaries, after pointing out that the brutal war violates the UN Charterâs first article.

Heâs right to ask. Long fetishized by progressives around the globe as the last bulwark of civilization against unending war, the United Nations has proven singularly inept at actually preventing violence and isolating dangerous regimes. In fact, it often empowers them.

As Zelensky put it: 'Where is the security that the Security Council is supposed to guarantee?'

Russiaâs presence as a permanent member at the Security Councilâs table â especially now, in the face of the sickening images of its war crimes in Bucha â makes a mockery both of the UN as an organization and the principles it claims to stand for. Zelensky correctly characterized Russiaâs behavior as 'no different' from that of ISIS.

The same might be said of Chinaâs permanent membership. Beijing has been waging a brutal internal war against the Uyghurs for years, while facing no real repercussions from a global body ostensibly dedicated to securing all human rights, everywhere...

The United Nations is utterly incapable of succeeding in its mission. Believers in its principles should be seeking something better to replace it. "
Date
April 5, 2022
Title
Zelensky is right: The United Nations is useless, The New York Post
Author(s)
Editorial Board
Original Source
https://nypost.com/2022/04/05/zelensky-is-right-the-united-nations-is-useless/
Attachment
Click here to view this article in MS Word/PDF format