How Assad's Allies Got $18 Million From the UN 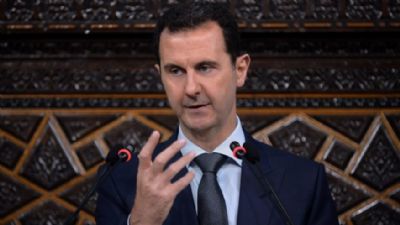 Syrian leader Bashar al-Assad (File photo)
"The United Nations paid at least $18 million last year to companies with close ties to Bashar al-Assad, some of them run by cronies of the Syrian president who are on U.S. and European Union blacklists.

Contracts for telecommunications and security were awarded to regime insiders including Rami Makhlouf, Assad's cousin. UN staff ran up a $9.5 million bill at the Four Seasons hotel in Damascus, co-owned by Syria's tourism ministry, according to the UN's annual report on procurement for 2016, a 739-page document published in June. Some UN money even went to a charity set up by the president's wife.

The UN has its own global blacklist and isn't bound by sanctions imposed by member states or regional blocs such as the EU. Still, the distribution of funds to Assad allies will further fuel criticism that the world body has failed badly over Syria, where more than six years of civil war have left at least 400,000 people dead...

'Any money going to Assad and his allies shows that the UN is not impartial but is in fact helping the largest player in the conflict,' said Kathleen Fallon, a spokeswoman for The Syria Campaign, an independent advocacy group. 'The regime has been responsible for the majority of the deaths, and they are being rewarded. It sends the wrong message.'..."
Date
August 1, 2017
Title
How Assad’s Allies Got $18 Million From the UN, Bloomberg News
Author(s)
Kambiz Foroohar
Original Source
https://www.bloomberg.com/news/articles/2017-08-01/what-sanctions-assad-allies-got-18-million-in-un-syria-payouts
Attachment
Click here to view this article in MS Word/PDF format