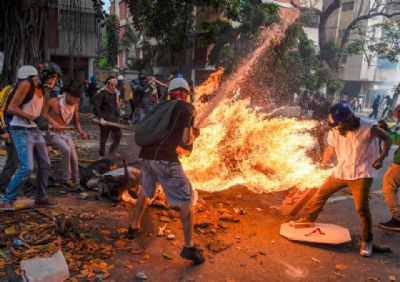 Venezuela riots
"U.N. Secretary-General AntÃ³nio Guterres continued the U.N.'s preference for dialogue and negotiations in dealing with the socialist dictatorship of Venezuela, dismissing President Trump's consideration of possible military action in the region.

Trump raised eyebrows Friday when, after calling Venezuela a 'dangerous mess,' he refused to rule out military action to topple dictator NicolÃ¡s Maduro.

The country frequently hailed by socialists all over the world as a success has spiraled out of control in recent months, with famine and riots surging through the country as Maduro has amassed more power and doctored the results of a recent election.

The U.N.'s refugee agency (UNHCR) announced in July that the number of asylum applications from Venezuelans had 'soared' with almost 50,000 applying for asylum in 2017, almost double the 27,000 that applied in the entirety of 2016...

Guterres told reporters that he would continue to push for dialogue, a theme the U.N. and Guterres himself has been pushing for months, despite calls from the U.S. and others for the international body to up its efforts. 'Well, it's a very clear message that Venezuela needs a political solution based on dialogue and compromise between the Government and the opposition...'

The U.S. has been looking for tougher action from the U.N. but has often been met with indifference. The Egyptian Ambassador to the United Nations, speaking in his role as president of the Security Council, told reporters last week that the crisis was not a matter for the Security Council.

'Until now I think, of course, there is some concern, but at the end of the day we see [the Venezuelan crisis] as internal affairs,' he said. 'It does not harm peace and security right now from my point of view.'..."
Date
August 16, 2017
Title
U.N. Secretary-General: Venezuela Needs ‘Compromise’ Between Dictator, Opposition, Breitbart
Author(s)
Adam Shaw
Original Source
http://www.breitbart.com/national-security/2017/08/16/u-n-secretary-general-rejects-trump-call-for-military-action-in-venezuela-pushes-dialogue/
Attachment
Click here to view this article in MS Word/PDF format