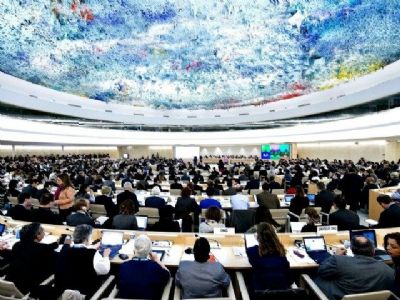 The UN Human Rights Council
"In the past few weeks, 130 Israeli companies and 60 international corporations operating in Israel received warning letters from United Nations High Commissioner for Human Rights Zeid bin Ra'ad al-Hussein cautioning them of their impending inclusion in a 'blacklist" of companies active beyond the Green Line in 'violation of international law and UN resolutions.'

Ynet has gained access to part of the list, which is set to be published in late December and cites 25 well-known Israeli companies. The companies operate in different sectors-some in food manufacturing, others in services, pharmaceuticals and even high-tech-but have one thing in common: they all operate in settlements, east Jerusalem and the Jordan Valley.

The Washington Post published American companies will also be appearing on the list, including Caterpillar, Tripadvisor and Airbnb.

Some of the companies to be included on the list are still considering their response, but others are already fighting back with the claim their inclusion on the list may cause them financial harm and tarnish their brand, and are therefore looking into filing suits against the Commissioner and the UN's Human Rights Council that called for the list's preparation in the first place.

The companies claim the list's creation was politically motivated and point to the fact that the commissioner constructed no such lists pertaining to other regions of conflict-such as the Crimean Peninsula and Western Sahara-as proof.

Both Israel and the US have been working behind the scenes in the past few weeks to prevent the list's publication, but it appears it may be presented with a fait accompli. Despite the fact the list carries no operational or legal ramifications, the symbolic move nevertheless caused concern among the Ministry of Foreign Affairs officials due to the fact it may provide a serious boost to BDS efforts, deter foreign investors and convince foreign companies operating in Israel to reduce their operations..."
Date
October 26, 2017
Title
130 Israeli companies, 60 int’l corporations on UN ‘blacklist’, YNet News
Author(s)
Itamar Eichner
Original Source
https://www.ynetnews.com/articles/0,7340,L-5034082,00.html
Attachment
Click here to view this article in MS Word/PDF format