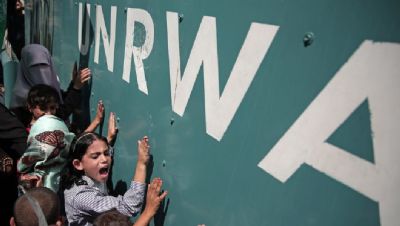 "The U.S. government continues to inappropriately keep classified a report on Palestinian refugees that congressional officials view as a potential game changer in how America approaches its regional policies and allocates billions in taxpayer funds, according to multiple sources with knowledge of the report.

Congressional officials familiar with the classified report, the existence of which was first disclosed by the Washington Free Beacon, say the State Department continues to keep it secret in order to not disrupt billions of dollars in allocations to United Nations Relief Works Agency for Palestine Refugees in the Near East (UNRWA), the organization responsible for providing aid to what they claim is some 5.2 million Palestinian refugees.

Those familiar with the report say the U.S. quietly determined under the Obama administration that the actual number of Palestinian refugees is far smaller, closer to around 30,000. This disclosure could fundamentally change the way billions of U.S. taxpayer dollars are allocated to UNRWA and the Palestinian government and impact America's longstanding policies regarding the Israeli-Palestinian peace process.

Those familiar with the classified report's contents told the Free Beacon the State Department is intentionally trying to keep the document secret, not for national security reasons, but because of the political implications of its release..."
Date
April 26, 2018
Title
U.S. Government Hiding Report on Number of Palestinian Refugees, The Washington Free Beacon
Author(s)
Adam Kredo
Original Source
http://freebeacon.com/issues/u-s-government-hiding-report-number-palestinian-refugees/amp/
Attachment
Click here to view this article in MS Word/PDF format