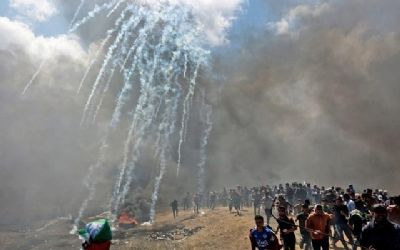 Palestinian rioters, April 14, 2018
"The United States on Monday blocked the adoption of a UN Security Council statement that would have called for an independent probe of deadly violence on the Israel-Gaza border, which erupted as the new US embassy in Jerusalem was opened, diplomats said.

'The Security Council expresses its outrage and sorrow at the killing of Palestinian civilians exercising their right to peaceful protest,' read a draft of the statement, a copy of which was seen by AFP.

'The Security Council calls for an independent and transparent investigation into these actions to ensure accountability,' read the text...

Israel blamed Hamas for the deadly violence, saying the terror group had encouraged and led the protests, which included attacks on Israeli troops and attempts to breach the border fence.

The IDF's spokesman said Hamas deployed 12 separate terrorist 'cells' to try to breach the border at different locations, and that all were rebuffed.

Citing Hamas sources, Israel's Hadashot TV news said 10 of the terror group's members were among those killed in the clashes, including a son of its co-founder Abdel Aziz al-Rantisi...