Former Israeli official: International Criminal Court decision to reach out to 'Palestinian victims' shows it is tool of Palestinian propaganda 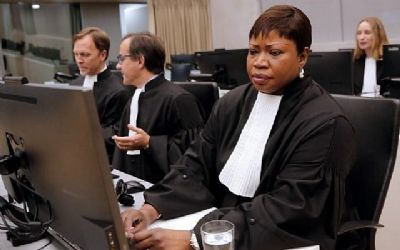 In a little-noticed press release issued Friday, three judges who are members of the so-called pretrial chamber dealing with Palestinian complaints of alleged Israeli war crimes ordered the court's registry 'to establish, as soon as practicable, a system of public information and outreach activities for the benefit of the victims and affected communities in the situation in Palestine.'

Furthermore, the judges required the registry - a neutral organ of the court providing administrative support - to open an 'informative page on the Court's website' geared exclusively to Palestinians, and to report on the progress of its activities every three months.

The judges' goal is the creation of a 'continuous system of interaction between the Court and victims, residing within or outside of Palestine,' they added...

The Israeli government declined to comment on the matter this week. But in private conversations, officials in Jerusalem stressed that the judges' statement merely talks about informing people about the court's work and does not take a position on the actual examination.

At the same time, the statement was deemed 'unusual' and 'strange' by the officials, in that it is almost unprecedented that a pretrial chamber would engage in active outreach to victims in a case that has not yet advanced to the stage of an investigation...

Alan Baker, a former legal adviser to Israel's Foreign Ministry who was involved in negotiating the ICC's founding statute, slammed the statement as 'quite crazy,' arguing that the court has allowed itself to become a tool of pro-Palestinian propaganda.

'This seems to me to be quite crazy, and the court is openly turning itself into a Palestinian propaganda engine, similar to the [United Nations] Human Rights Council, with a regular reporting regime on Palestine only and a distinct section of its website devoted to Palestine,' Baker told The Times of Israel.

The three ICC judges were going out of their way to cater to Palestinian victims in preparation of a trial, despite the fact that the prosecutor has not yet decided whether to open an investigation or whether the court even has jurisdiction over the territory in question, Baker noted.

'All this seems to indicate that the ICC is venturing far beyond its role and is being politically manipulated, or is manipulating itself, against its own better interests'..."
Date
July 16, 2018
Title
In rare step, International Criminal Court reaches out to ‘Palestinian victims’, The Times of Israel
Author(s)
Raphael Ahren
Original Source
https://www.timesofisrael.com/in-rare-step-international-criminal-court-reaches-out-to-palestinian-victims/
Attachment
Click here to view this article in MS Word/PDF format