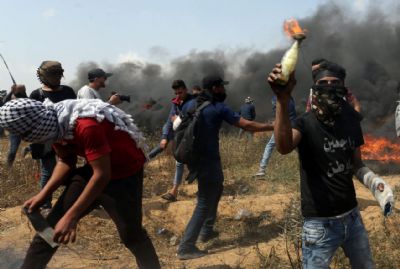 Palestinian rioters along the Gaza border
"In yet another showing of blatant antisemitism, the United Nations Secretary-General, Antonio Guterres, declared last Friday that the Gaza Palestinians, who have been violently attempting to infiltrate the Israeli border to 'kill the Jews' and 'burn the Jews,' are the victims and in need of armed security.

This mind-boggling defense of terrorists is of no surprise to those of us who follow UN politics. Earlier this summer when the US walked out on the UN Human Rights Council, Nikki Haily issued a statement on the decision, calling the Council a protector of 'the world's worst human rights abusers' with a 'chronic bias against Israel.'

The UN has maintained a consistent position of hatred of Israel since 1967. Why? Because the existence of a Jewish State is an affront to the 47 Muslim-majority countries at the UN who do not believe that Jews should have a country, let alone live side-by-side with them. It is an anti-Jewish, hateful position that is inconsistent with the word unity that crowns the title of this deceptive organization...

UN vehicles have been used to transport Hamas weapons. And UN-funded schools for Palestinians teach Palestinian children to hate Jews. More alarmingly, UN staff is not tested for terrorist ties.

Should the UN arm and protect the terrorists attacking Israel? No. But will they? If history is of any indication, the answer is an unequivocal yes."
Date
August 23, 2018
Title
UN Wants To Arm and Defend Terrorists Attacking Israel, Townhall
Author(s)
Marina Medvin
Original Source
https://townhall.com/columnists/marinamedvin/2018/08/23/un-wants-to-arm-and-defend-terrorists-attacking-israel-n2512230
Attachment
Click here to view this article in MS Word/PDF format