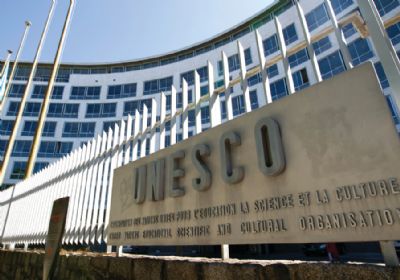 On April 11, the organization's 58-member executive board will vote on the twice-a-year resolutions on 'Occupied Palestine... Jerusalem and its Walls,' 'Palestinian Education, Youth,' etc., and on the 'Occupied Syrian Golan.'...

Since Palestinian entry into UNESCO in November 2011, along with a voracious appetite, it has annually demanded and received as heritage sites: the Church of the Nativity in Bethlehem, Battir (the headquarters of Bar-Kochba's Beitar revolt against the Romans), Bilal ibn Rabah Mosque (Rachel's Tomb), Haram al Sharif (the Temple Mount), Buraq Plaza (the Kotel, or Western Wall), and Al-Haram al-Ibrahimi Mosque (Tomb of the Patriarchs) in Khalil (Hebron).

Celestial and terrestrial Jerusalem meet in the so-called 'Holy Basin,' where most of the three monotheistic faiths' shrines are concentrated. Through the World Heritage Committee, their claims are ultimately aimed at sovereignty.

The Jewish Western Wall stands below the Temple Mount esplanade, connected by the 'Mughrabi Ascent.' If Islamized, a non-Muslim worshiper at the Western Wall could conceivably be viewed as a trespassing infidel.

The aim is patently to obtain sites to surround Jerusalem and its suburbs.

In the absence of Israel, the Palestinians have courted the UNESCO Secretariat with a series of demands:

â¢ On December 3, 'Old City of Jerusalem and its Walls' (additions have been made to previous versions).

â¢ On December 14, 'Al-Khalil/Hebron Old Town' (an addition to the already designated Cave of the Patriarchs).

â¢ On January 7, 'Palestinian Olives and Vines â Cultural Landscape of South Jerusalem' (an addition to the already designated Battir).

It is time for the UNESCO secretariat, and responsible member states, to end the biennial antisemitic diplomacy against Israel, and return to its pristine programs for protection, preservation and celebration of the world's heritage, and thereby entice an American and Israeli to return to its fold."
Date
April 10, 2019
Title
Palestinian aggression against interfaith harmony at UNESCO, The Jerusalem Post
Author(s)
Shimon Samuels
Original Source
https://www.jpost.com/Israel-News/Palestinian-aggression-against-interfaith-harmony-at-UNESCO-586433
Attachment
Click here to view this article in MS Word/PDF format