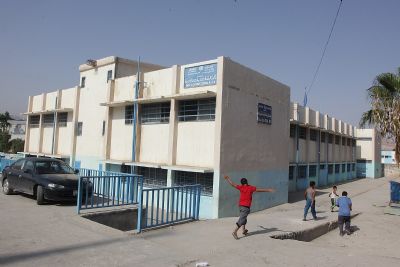 Groiss said that in 2016, the P.A. issued new textbooks ... based on three principles: delegitimization of the existence of the State of Israel, which is a full member state of the United Nations; demonization of both Israel and the Jews; and advocacy of a violent struggle for the liberation of all of 'Palestine,' including pre-1948 borders, thus wiping Israel off the map.

These books and their curricula are used in first grade through 10th grade in UNRWA-supported Palestinian refugee camps, and are financed by 67 donor nations.

The newest editions of the textbooks do not mention 'Israel' even once; instead, the Jewish nation has been replaced with the 'Zionist Occupation.'

Fifth-graders, as part of their Islamic-education class, are taught that holy sites like the Western Wall have no connection to Jews: 'The Al-Buraq Wall is part of the western wall of Al-Aqsa Mosque and it is an absolute right of the Muslims alone,' instruct the textbooks. In their social-studies textbooks, eighth-grade students are prompted: 'Let us think and discuss: I will compare the tragedy of the red-skinned Indians, the original inhabitants of America, and the tragedy of the Palestinian people.' While learning Arabic, ninth-graders read a story that mentions a 'barbecue party'-that is, a bus in the Psagot 'colony' (a Jewish settlement in the West Bank) being burned by Molotov cocktails (presumably filled with people).

And third-graders are taught in a national/social-upbringing class that Jerusalem has no historical or modern-day connection to Jews: "Jerusalem is an Arab city built by our Arab ancestors thousands of years ago. Jerusalem is a holy city among Muslims and Christians.'..."
Date
April 24, 2019
Title
UNRWA schools continue teaching Palestinian children to wage war on Israel, Jewish News Syndicate
Author(s)
Shlomo Deutsch
Original Source
https://www.jns.org/unrwa-schools-continue-to-teach-palestinian-children-to-wage-war-on-israel/
Attachment
Click here to view this article in MS Word/PDF format