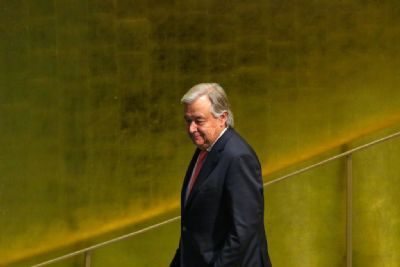 U.N. Secretary-General Antonio Guterres reminded the audience that the Holocaust was 'only as far back as a single average human lifespan' and noted that while Adolf Hitler and Nazi Germany had been defeated in World War II, 'anti-Semitism has not been extinguished. Far from it.'...

However, Anne Bayefsky, the director of the Touro Institute on Human Rights and the Holocaust, told Fox News that the Guterres must do more to address anti-Semitism, which she said goes largely unchecked throughout the global organization.

'The U.N. Secretary-General paid the usual U.N. lip-service to the Holocaust, and then declared the United Nations fights the ills of bigotry and anti-Semitism as a matter of its very identity,' Bayefsky said. 'That's false. The U.N. provides a global platform to promote anti-Semitism dressed-up as anti-Zionism, the hatred of Israel, and falsehoods about Israeli crimes.'

'I fear the truth is that as long as we believe that the United Nations - an organization controlled by forces antithetical to human rights,' she added, 'is part of the solution to limiting the reach of anti-Semitism, the less likely we will ever get there.'"
Date
June 26, 2019
Title
Israel’s UN envoy calls on world to ‘declare war’ on anti-Semitism, Fox News
Author(s)
Ben Evansky
Original Source
https://www.foxnews.com/world/israels-un-envoy-calls-on-world-to-declare-war-on-anti-semitism
Attachment
Click here to view this article in MS Word/PDF format