Nonprofit discovers "suing the United Nations is really hard to do" 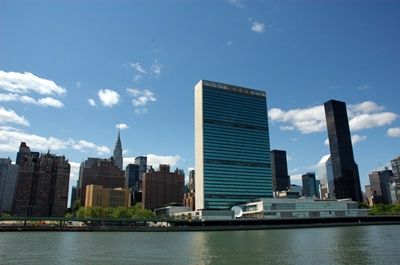 UN headquarters, New York City
"Most of us will go through life without ever making this discovery, but Brian Concannon has learned something interesting in the past few months: Suing the United Nations is really hard to do.

It isn't that winning a suit against the UN is just difficult; it's that a victory is almost impossible. Even serving legal documents on its New York headquarters is harder than one might think. 'It's a huge game of cat-and-mouse', Concannon said the other day, sitting in his Andrew Square office. 'You take it to headquarters, they won't let you in. You mail it return receipt and they won't acknowledge that they have received it.'

Concannon is head of a Boston-based nonprofit called the Institute for Justice and Democracy in Haiti. For a year, the institute has been trying to bring attention to - and get action on - the scourge of cholera in Haiti. Concannon's work has gotten the UN's attention.

The basic facts are not really disputed, not even by the UN. A peacekeeping force from Nepal introduced cholera into the drinking water following the earthquake that racked Haiti in 2010...In a medical nightmare worsened by chronically inadequate sanitation, cholera has killed an estimated 4,000 Haitians so far - with the emphasis on estimated...

Ultimately, Concannon said he believes that the UN - which enjoys broad immunity from lawsuits - has resorted to the strategy of acknowledging the widespread incidence of cholera, while downplaying its culpability...

Under pressure, the United Nations has floated a $2.2 billion plan to clean up the water supply in Haiti. The UN says it is in the process of appointing a commission that might oversee said plan. Appointing members is expected to take until April. The UN isn't famous for its sense of urgency."
Date
February 10, 2014
Title
Local nonprofit up against the UN for Haiti, Boston Globe
Author(s)
Adrian Walker
Original Source
http://www.bostonglobe.com/metro/2014/02/10/andrew-square-activist-continues-push-united-nations-address-cholera-epidemic-has-caused-haiti/ZLn41FBLsnkEfzFIEY5DiJ/story.html
Attachment
Click here to view this article in MS Word/PDF format