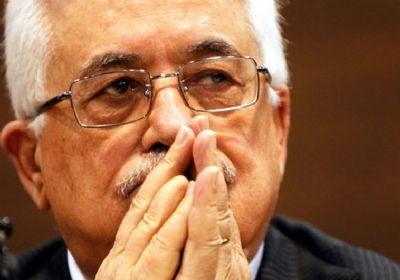 PA President Mahmoud Abbas. (photo credit:REUTERS)
"Israel froze [tax revenue collected on the behalf of the Palestinian Authority] in December after the PA decided to join the International Criminal Court in The Hague and thereby instigate proceedings against Israel for alleged war crimes...

But, as on previous occasions, Israeli punitive reactions are short-lived â no matter how justified. This time, too, the government relented following pressure from Washington and handed over to Ramallah NIS 1.37 billion.

But Israel held back a symbolic NIS 160,000 to defray a fraction of the PA's NIS 2b. debt to the Israel Electric Corporation. The PA is also in massive arrears to Mekorot for water piped to it and to Israeli hospitals for unpaid medical bills.

According to PA President Mahmoud Abbas's arithmetic, however, this token deduction amounts to 'a full third of the total.' Therefore, he said, he refuses to accept any of the money and is prepared to take Israel to the ICC over the matter. The Palestinian media, which Abbas controls, is already rife with threats that 'Israel's thieving would be the first war crime on which it would be tried internationally.'

It might be absurd to presume that collecting a small portion of enormous outstanding utility bills can be portrayed as a war crime. But what holds true for other nations is not so in Israel's case...

It might make for fascinating legal high jinks if Abbas does press this matter at the ICC, after having brazenly racked up alarming debts and then gallingly waited quite content to have Israelis pick up his regime's tab. It would be interesting to see if anti-Israel bias could move jurists abroad to actually rule that it is an inalienable Palestinian right not to pay any bills but to enjoy free electricity, as well as other utilities and services, at the direct expense of Israeli consumers.

It is safe to assume that no such precedent exists in the annals of jurisprudence. Still, serial non-fulfillment of financial obligations by the Palestinians â in many spheres, not only vis-Ã -vis the IEC â has not dampened Ramallah's chutzpah."
Date
April 8, 2015
Title
The PA’s Audacity, The Jerusalem Post
Author(s)
JPOST Editorial
Original Source
http://www.jpost.com/Opinion/The-PAs-audacity-396600
Attachment
Click here to view this article in MS Word/PDF format