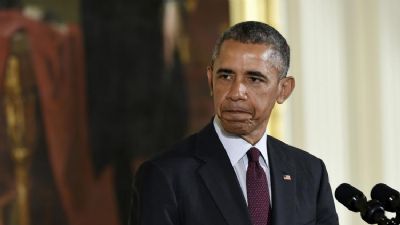 President Obama (Susan Walsh / Associated Press)
"President Obama took a step toward a tougher line with Israel in an interview released Tuesday, raising the possibility that the U.S. will allow a United Nations vote on issues related to the Palestinians if the two sides make no meaningful movement toward peace.

In an interview with an Israeli television station, Obama noted that his administration has 'up until this point' quashed such efforts at the U.N. while insisting that the Israelis and Palestinians must negotiate a resolution. But he said it is a challenge for the U.S. to keep demanding that the Palestinians negotiate in good faith if no one believes the Israelis are doing the same...

Obama told Dayan that the U.S. assistance to Israel on security, intelligence and military matters 'doesn't go away' because it is part of a 'solemn commitment that I've made with respect to Israel's security.'

But there may be a 'practical consequence' if there are new resolutions introduced in the U.N., he said..."
Date
June 2, 2015
Title
Obama Raises Possibility of Allowing U.N. Vote on Palestinian Statehood, Los Angeles Times
Author(s)
Christi Parsons and Michael A. Memoli
Original Source
http://www.latimes.com/world/middleeast/la-fg-obama-israel-palestinians-20150602-story.html?utm_source=Sailthru&utm_medium=email&utm_term=%2AMideast%20Brief&utm_campaign=New%20Campaign
Attachment
Click here to view this article in MS Word/PDF format