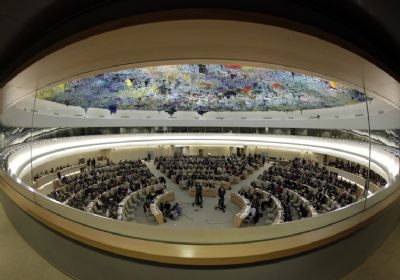 Overview of a Human Rights Council special session at the United Nations in Geneva. (REUTERS)
"A day after the Human Rights Council presented its report on last summer's war in Gaza, Israeli diplomats began trying on Tuesday to convince as many countries as possible on the 47-member council not to endorse the report when, as expected, it comes up for a vote next week.

With 30 percent of the council made up of either Muslim countries that can be counted on to vote against Israel, or those like Cuba, Bolivia and Venezuela who do not have diplomatic ties with Israel, government officials acknowledge that winning a vote is almost impossible.

The goal, therefore, is to get as many democracies as possible â a 'moral minority' â to vote in the council against endorsing the report, in the hope that this will denude it of legitimacy and moral authority..."
Date
June 24, 2015
Title
Jerusalem Pushes Democracies to Reject UN Gaza Report, The Jerusalem Post
Author(s)
Herb Keinon
Original Source
http://www.jpost.com/Arab-Israeli-Conflict/Jerusalem-pushes-democracies-to-reject-UN-Gaza-report-406953
Attachment
Click here to view this article in MS Word/PDF format