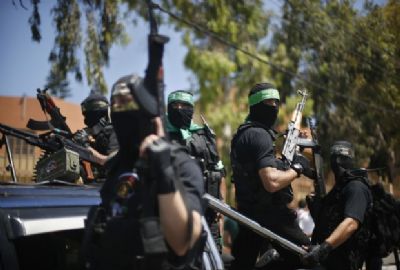 Hamas terrorists in Gaza (file photo)
"U.N. reports on Israel sometimes remind us of the classic Monty Python sketch 'Nobody Expects the Spanish Inquisition!' with its screwball combination of comic ineptitude and malignant predictability. So it is with Monday's inquisi-er, 'Inquiry'-by the U.N. Human Rights Council on last summer's war between Israel and its terrorist enemies in Gaza.

The 183-page report, from former New York state Justice Mary McGowan Davis and Senegalese lawyer Doudou Diene... is fundamentally an anti-Israel document. The bias begins with a preposterous claim that Israel continues to 'occupy' Gaza, despite its 2005 withdrawal, on the theory that Israel has the capacity 'to send troops within a reasonable time to make its power felt.' By that standard, the U.S. occupies Canada and the Bahamas...

The Obama Administration says it will oppose bringing the report to the U.N. Security Council, but it lent legitimacy to the enterprise when it joined the Human Rights Council after the Bush Administration had stayed away. If the President wants to demonstrate his support for Israel, one place to start would be to withdraw from the Council for producing this shameful report."
Date
June 24, 2015
Title
The U.N.’s Israel Inquisition, The Wall Street Journal
Original Source
http://www.wsj.com/articles/the-u-n-s-israel-inquisition-1435186279
Attachment
Click here to view this article in MS Word/PDF format