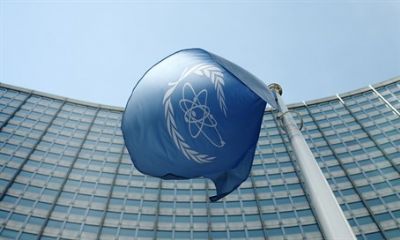 IAEA flag in front of its headquarters in Vienna (Reuters)
"The International Atomic Energy Agency's (IAEA) annual general conference will be held on Thursday, and once again Arab states will attempt to pass a resolution at this meeting that would force Israel to join the Treaty on the Non-Proliferation of Nuclear Weapons (NPT).

The Arab states' resolution against Israel is an annual tradition. Arab member states have accused Western countries of double standards on the nuclear issue by not putting Israel's activities under IAEA supervision, while forcing Iran to honor its obligations under the NPT.

The resolution has been rejected every time so far. Last year, a similar measure by 18 Arab member states was rejected by 58 votes to 45, with 27 countries abstaining.

The measure was similarly defeated in 2013 by 51 votes against and 43 in favor with 32 abstentions...

Israel is working behind the scenes, in coordination with the United States and other allies in the West, to obtain a majority that would thwart the Arab resolution...

Meanwhile, the head of Israel's Atomic Energy Commission Ze'ev Snir spoke Wednesday before the IAEA conference and denounced the Arab states for their attempt to attack Israel, warning the resolution is politically motivated proposal and is designed to isolate Israel.

Snir warned that 'if the resolution passes it will harm the credibility of the IAEA through politicization and depletion of its precious resources. This is clearly beyond the scope and mandate of the IAEA. The discussion on these proposals is imposed on the general conference year after year and most of the member states understood that by having rejected these proposals three times in recent years.'"
Date
September 17, 2015
Title
Arab States Again Trying to Pass Anti-Israel Resolution at IAEA, Arutz Sheva
Author(s)
Elad Benari
Original Source
http://www.israelnationalnews.com/News/News.aspx/200748#.VfrDcJezljs
Attachment
Click here to view this article in MS Word/PDF format