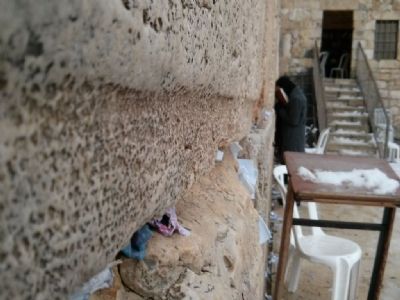 A woman prays at the Western Wall (Yifa Yaakov/The Times of Israel)(File photo)
"The Palestinians have withdrawn their demand that the United Nations Educational, Scientific, and Cultural Organization declare the Western Wall an "integral part" of the Al-Aqsa Mosque compound on Jerusalem's Temple Mount, Israeli officials said Wednesday.

Israel's ambassador to UNESCO, Carmel Shama Hacohen, confirmed to Israel Radio Wednesday that the Palestinian delegation had proposed a new version of the controversial resolution, removing the clause that would have declared the Western Wall a Muslim site.

He said the initial proposal had met with opposition from a range of countries including Russia, China and even Cuba.

The resolution - which the United Nations Educational, Scientific, and Cultural Organization (UNESCO) executive board is scheduled to vote on Wednesday - still contains a request to recognize Rachel's Tomb in Bethlehem and the Tomb of the Patriarchs in Hebron as Muslim sites. Israeli diplomats said they would continue to fight the resolution, and try to get allied states to reject it...

According to sources in Paris, where UNESCO's executive committee was to vote Wednesday, negotiations over the final draft were still ongoing. Some European governments have not yet decided how they are going to vote...

Speaking alongside UN Secretary General Ban Ki-moon, who visited Israel on Tuesday in a bid to pursue solutions to the resurgent violence, President Reuven Rivlin said efforts to inflame tensions must be rejected.

'The United Nations and all its institutions have a responsibility to work against any escalation of the conflict. UNESCO must reject any attempt to deny the Jewish connection to the Temple Mount,' he said..."
Date
October 21, 2015
Title
Palestinians Drop Bid to Name Western Wall Part of Al-Aqsa, The Times of Israel
Author(s)
Raoul Wootliff and Raphael Ahren
Original Source
http://www.timesofisrael.com/palestinians-drop-bid-to-name-western-wall-part-of-al-aqsa/
Attachment
Click here to view this article in MS Word/PDF format