State Department: Iran Deal Is Not 'Legally Binding' and Iran Didn't Sign It 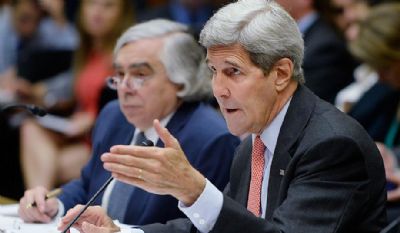 Secretary Kerry testifies about the Iran nuclear deal, July 28, 2015. (Olivier Douliery/Getty)
"President Obama didn't require Iranian leaders to sign the nuclear deal that his team negotiated with the regime, and the deal is not "legally binding," his administration acknowledged in a letter to Representative Mike Pompeo (R., Kan.) obtained by National Review.

"The Joint Comprehensive Plan of Action (JCPOA) is not a treaty or an executive agreement, and is not a signed document," wrote Julia Frifield, the State Department assistant secretary for legislative affairs, in the November 19 letter.

Frifield wrote the letter in response to a letter Pompeo sent Secretary of State John Kerry, in which he observed that the deal the president had submitted to Congress was unsigned and wondered if the administration had given lawmakers the final agreement. Frifield's response emphasizes that Congress did receive the final version of the deal. But by characterizing the JCPOA as a set of 'political commitments' rather than a more formal agreement, it is sure to heighten congressional concerns that Iran might violate the deal's terms...

Iranian President Hassan Rouhani discouraged his nation's parliament from voting on the nuclear deal in order to avoid placing legal burdens on the regime. 'If the Joint Comprehensive Plan of Action is sent to [and passed by] parliament, it will create an obligation for the government. It will mean the president, who has not signed it so far, will have to sign it,' Rouhani said in August. 'Why should we place an unnecessary legal restriction on the Iranian people?'..."
Date
November 24, 2015
Title
State Department: Iran Deal Is Not ‘Legally Binding’ and Iran Didn’t Sign It, National Review
Author(s)
Joel Gehrke
Original Source
http://www.nationalreview.com/article/427619/state-department-iran-deal-not-legally-binding-signed