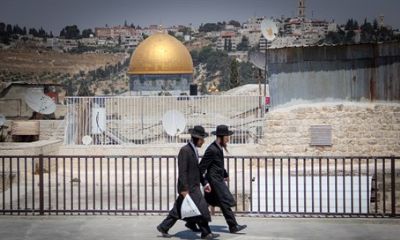 Religious Jews walk past the Temple Mount and the Dome of the Rock (Flash 90)
"In honor of Holocaust Remembrance Day, leading pro-Israeli Christian groups are heading to the UN to condemn UNESCO's effort to deny the Jewish nature of the Temple Mount, the holiest site in Judaism.

Laurie Cardoza-Moore, Special UN Envoy for the World Council of Independent Christian Churches (WCICC) and President of Proclaiming Justice to The Nations (PJTN), is to take part in UN meetings where she will condemn UNESCO's shocking resolution last month, which recognized the Mount only as Al-Aqsa Mosque...

'This message is particularly important on Holocaust Remembrance Day, because we cannot afford to standby as Jewish history is publicly denied by an organization of the United Nations,' warned Cardoza-Moore.

The PJTN president also warned that by denying the connection between the Jewish people and the Temple Mount, UNESCO is undermining its own stated mission which is 'to contribute to the building of peace,' as its denial increases violence and violates the human rights of Jews and Christians who support the Jewish connection to Jerusalem and all Israel..."
Date
May 5, 2016
Title
‘UNESCO Temple Mount Denial is Worse than Holocaust Denial’, Arutz Sheva
Author(s)
Ari Yashar
Original Source
http://www.israelnationalnews.com/News/News.aspx/211832#.VyycFXqs0Zw
Attachment
Click here to view this article in MS Word/PDF format