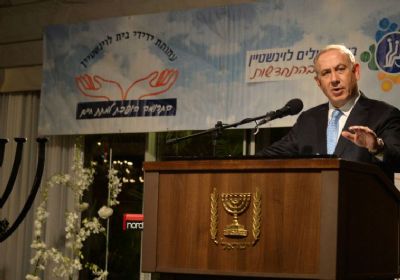 Netanyahu told the crowd that he was there to comfort everyone following the UN's decision.

The decision was 'shameful,' the Prime Minister repeated multiple times.

Speaking of US President Barak Obama's choice to abstain from voting, Netanyahu said that Obama went against Israel, backing out of the commitment it had made to stand for Israel.

'The decision not only does not help us make peace, it stands in the way of peace,' stated Netanyahu...

Israel will not accept the decision and it will be cancelled, he stated, though it may take time. He also stated that Israel would stop funding UN institutions.

Netanyahu has instructed Israel's ambassadors in New Zealand and Senegal to return to Israel for consultations, his spokesman said on Friday, in response to a UN resolution on settlements..."
Date
December 24, 2016
Title
‘Israel to Stop Funding UN Institutions’, The Jerusalem Post
Original Source
http://m.jpost.com/Israel-News/Benjamin-Netanyahu/Netanyahu-Israel-will-stop-funding-the-UNs-institutions-476412#article=6020NEQ4ODQ5OTJFNUI5MzJFMDQ2MTJCMERGMTc5NEE5QkY=
Attachment
Click here to view this article in MS Word/PDF format