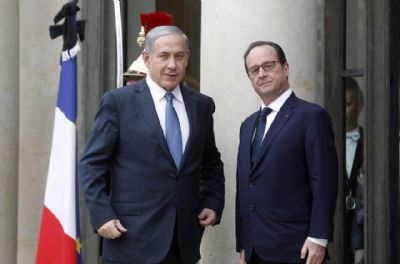 Some 70 countries are expected to attend the summit, organized at the initiative of French President FranÃ§ois Hollande.

Netanyahu has repeatedly rejected the conference proposal, making clear he would agree to meet with Hollande and Palestinian Authority President Mahmoud Abbas for talks, but only if there is no international summit.

Leaders of the Conference of Presidents of Major American Jewish Organizations called this week for the French to cancel or, at least, postpone what they called an 'ill-conceived, poorly timed and damaging' event.

'Now is a time for serious reflection on how peace can best be achieved, not for another sham forum in which the usual one-sided outcomes against Israel are the likeliest result,' the group wrote in a statement.'..."
Date
January 2, 2017
Title
Jewish Groups Speak Out Against Paris Peace Conference Following UN Vote, The Jerusalem Post
Author(s)
Danielle Ziri
Original Source
http://m.jpost.com/Israel-News/Politics-And-Diplomacy/Jewish-groups-speak-out-against-Paris-peace-conference-following-UN-vote-477292#article=6017MDQ4REZCNEYyQzhFMEE1MEIyRkE4NjE5NzRCOTZENkY=
Attachment
Click here to view this article in MS Word/PDF format