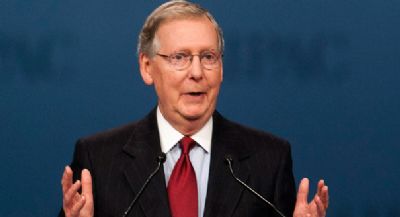 Senate Majority Leader Mitch McConnell
"Mitch McConnell and Chuck Schumer are backing a resolution championed by Marco Rubio that objects to the United Nations' recent condemnations of Israeli settlements in the West Bank and East Jerusalem, all but assuring the Senate will move to publicly criticize the international body.

The resolution, written by Rubio and Sen. Ben Cardin (D-Md.) with heavy input from leadership in both parties, will express 'grave objection' to the UN vote in December and calls for a reversal of the controversial action, according to a copy of the resolution reviewed by POLITICO.

The resolution 'urges the current presidential administration and all future presidential administrations to uphold the practice of vetoing all United Nations Security Council resolutions that seek to insert the Council into the peace process, recognize unilateral Palestinian actions including declaration of a Palestinian state, or dictate terms and a timeline for a solution to the Israeli-Palestinian conflict,' according to the draft text. It also 'demands that the United States ensure that no action is taken at the Paris Conference on the Israeli-Palestinian conflict scheduled for January 15, 2017.'...