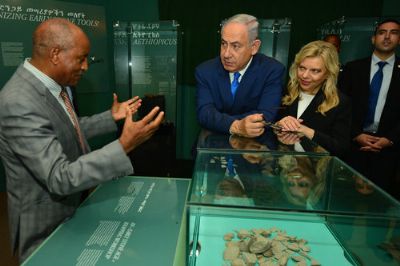 'Africa is as high as it has ever been in the pyramid of our foreign policy interests, except perhaps in the 1960s,' Netanyahu said. 'The first interest is to dramatically change the situation regarding African votes at the U.N. and other international bodies from opposition to support.'

Netanyahu told the Israeli diplomats that his top goal is to 'change their voting patterns given that the automatic majority against Israel at the U.N. is composed-first and foremost-of Arab countries. There are 54 countries [in Africa]. If you change the voting pattern of a majority of them, you at once bring them from one side to the other. We want to erode the opposition and change it to support.'

'While there are many other goals, it outweighs them all,' the prime minister said, adding that 'the day is not far off when we will have a majority" of support in the U.N..."
Date
February 8, 2017
Title
Netanyahu to Africa Envoys: Changing UN Voting Patterns is Top Diplomatic Goal, JNS.org
Original Source
http://www.jns.org/news-briefs/2017/2/8/netanyahu-to-israels-africa-envoys-changing-un-voting-patterns-is-top-diplomatic-goal#.WJyWMvKHhX4=
Attachment
Click here to view this article in MS Word/PDF format