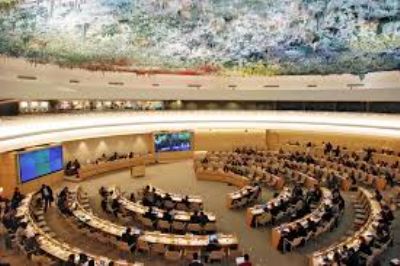 The UN Human Rights Council
"The Trump administration is considering pulling the United States out of the United Nations Human Rights Council, a body that has been accused of being biased against Israel and criticized for including abusive governments, according to two sources in regular contact with former and current U.S. officials.

No immediate withdrawal is expected ahead of the council's next session, which starts Monday...

A final decision on membership in the council would likely involve Secretary of State Rex Tillerson, as well as the U.S. ambassador to the United Nations, Nikki Haley, and of course the president himself.

A former State Department official briefed on the discussions said while the council's targeting of Israel is likely part of the debate, there also are questions about its roster of members and doubts about its usefulness overall.

Countries known for human rights abuses, such as China and Saudi Arabia, have managed to snag seats on the 47-member council.

'There's been a series of requests coming from the secretary of state's office that suggests that he is questioning the value of the U.S. belonging to the Human Rights Council,' the former official said.