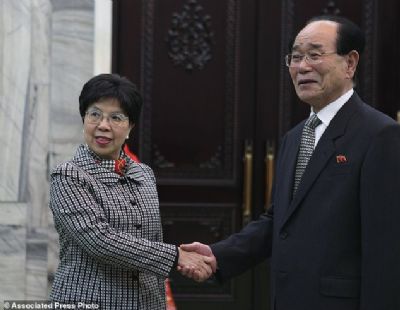 Dr. Margaret Chan commended Russia's public health achievements and asked if the country might be willing to make a cheap vaccine for use in developing countries. WHO could test it and if approved, the shot would help the poor and vulnerable, Chan suggested.

Putin hesitated, saying he wasn't sure there would be a sufficient market. He then noted a precipitous drop in the number of Russians employed by the United Nations health agency, from 52 to 17. Could Chan look into the situation, the prime minister asked?

Chan promised to consider the matter, according to internal notes of her June 2009 trip obtained by the Associated Press.

'She admitted that very few Russian nationals are now at senior positions in WHO,' the notes state, going on to refer to 'a need to discuss how to encourage them to apply.'

During her decade-long tenure as WHO's leader, Chan has often described herself as a 'servant' of the agency's 194 member countries. She says she accomplishes more with stern, behind-the-scenes diplomacy than with public criticism. But confidential notes detailing her work trips show that even in private, Chan, whose successor will be chosen Tuesday, sometimes was more inclined to appease heads of state than to challenge them on health issues...

Chan's multiple visits to authoritarian countries have raised some eyebrows, since no obvious health crises prompted the trips and spending time with leaders with patchy human rights records might have compromised the agency's integrity.

In April 2010, she led a delegation to Pyongyang, North Korea. After applauding the government's 'notable public health achievements,' including its 'excellent' tuberculosis treatment and 'good immunization coverage,' Chan opened the telemedicine facilities at the Kimanyu hospital that WHO helped support.