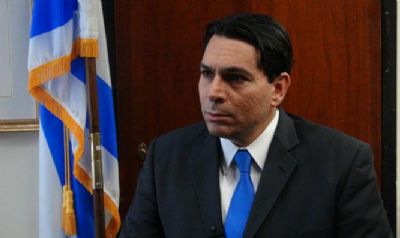 Israeli Ambassador to the UN Danny Danon (File photo)
"Israeli leaders on Tuesday attacked the secretary general of United Nations for a statement in which he decried the ongoing 'occupation' of Palestinian territories.

Marking the 50th anniversary of the Six Day War, AntÃ³nio Guterres issued a statement lamenting the effects of Israel's subsequent occupation of the West Bank, East Jerusalem, Gaza and the Syrian Golan, which he said caused the 'displacement of hundreds of thousands of Palestinians and Syrians' and 'fueled recurring cycles of violence and retribution...

Israel's ambassador to the UN, Danny Danon, responded by saying that attacks on Israel by its neighbors did not begin in 1967.

'Any attempt at a moral equivalency between killing innocent people and the building of homes is absurd,' he said.

Instead of spreading 'Palestinian misinformation' the UN should stick to the facts, Danon added.

'It is preposterous to blame terror and violence in the Middle East on the one true democracy in the region,' he said. 'The moment the Palestinian leadership abandons terror, ceases to incite against our people and finally returns to direct negotiations, then real progress can be made towards peace.'..."
Date
June 6, 2017
Title
Israelis Cry Foul as UN Leaders Lament 50 Years of ‘Occupation’, The Times of Israel
Author(s)
Raphael Ahren
Original Source
http://www.timesofisrael.com/israelis-cry-foul-as-un-leaders-lament-50-years-of-occupation/
Attachment
Click here to view this article in MS Word/PDF format