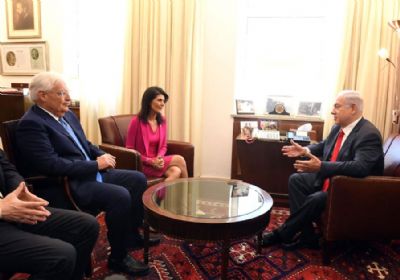 U.S. Ambassador to the UN Nikki Haley and US Ambassador to Israel David Friedman meet with Prime Minister Benjamin Netanyahu in Jerusalem.
"Anticipating the possibility of another war in Lebanon, Prime Minister Benjamin Netanyahu spoke on Wednesday with Nikki Haley, Washington's ambassador to the UN, about a possible Security Council resolution calling for the removal of Hezbollah forces from southern Lebanon, The Jerusalem Post has learned.

According to senior government officials, Netanyahu and Haley â who arrived early on Wednesday for a three-day visit â spoke about strengthening the mandate of UNIFIL, the United Nations Interim Force in Lebanon, to make it more effective in enforcing Security Council Resolution 1701, which put an end to the 2006 Second Lebanon War.

Under terms of that resolution, the area from the Israel-Lebanon border to the Litani River is to be an "'free of any armed personnel, assets and weapons other than those of the Government of Lebanon.'

In actuality, however, Hezbollah is ensconced there with tens of thousands of missiles pointed toward Israel.

One senior government official said that even if it was not realistic that UNIFIL would be able to clear Hezbollah â now a powerful political and military force in Lebanon â out of southern Lebanon, it is important for the issue to be placed before the Security Council.

'If there is another conflict and we will have to hit missile launchers that are placed in private homes, it will be difficult for the Security Council to condemn us if the matter is brought to the Security Council now,' the official said. 'We want to bring to the world's attention, now, that Hezbollah is arming and using schools and hospitals to place launchers so that if there are victims in the future the world does not come to us with complaints.'

Netanyahu also talked with Haley about the likelihood that the humanitarian crisis in Gaza will come before the Security Council in the near future and the need to prepare for that eventuality..."
Date
June 8, 2017
Title
Netanyahu, Haley Discuss UNIFIL Mandate vs Hezbollah, The Jerusalem Post
Author(s)
Herb Keinon
Original Source
http://www.jpost.com/Israel-News/Politics-And-Diplomacy/Netanyahu-Haley-discuss-UNIFIL-mandate-vs-Hezbollah-496200
Attachment
Click here to view this article in MS Word/PDF format