Under U.S. pressure, U.N. agrees on cuts to peacekeeping 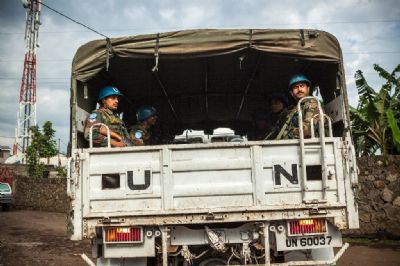 United Nations peacekeepers in the Democratic Republic of the Congo (File photo)
"A tentative deal to cut nearly $600 million from the UN peacekeeping budget was reached on Wednesday, capping weeks of tough negotiations over US demands for a sharp reduction in costs, UN diplomats said.

Under the deal agreed by a budget committee of the General Assembly, the United Nations will spend $7.3 billion on peacekeeping in the coming year, down from the current $7.87 billion -- roughly a seven percent cut -- according to diplomats familiar with the negotiations.

The United States, the biggest financial contributor to UN peacekeeping, had sought a nearly $1 billion cut to the bill and the European Union had also pushed for savings to bring costs down to $7.3 billion...

US Ambassador Nikki Haley wants to bring the US share of the peacekeeping budget down to 25 percent. China, Japan, Germany and France are the four biggest peacekeeping financial backers after the United States.

The budget deal falls short of what UN Secretary-General Antonio Guterres was seeking. He had put forward a budget of $7.97 billion for the year which runs from July 1 to June 30, 2018..."
Date
June 28, 2017
Title
Under US pressure, UN agrees deep cuts to peacekeeping, Yahoo News
Author(s)
Carole Landry
Original Source
https://www.yahoo.com/amphtml/news/deal-reached-cuts-un-peacekeeping-diplomat-140629913.html
Attachment
Click here to view this article in MS Word/PDF format