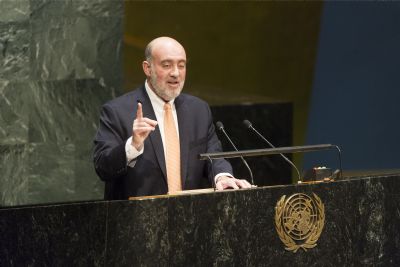 Ron Prosor, Ambassador of Israel
"The fact of the matter is that when members of the international community speak about the Israeli-Palestinian conflict, a fog descends to cloud all logic and moral clarity. The result isn't realpolitik, its surrealpolitik.

The world's unrelenting focus on the Israeli-Palestinian conflict is an injustice to tens of millions of victims of tyranny and terrorism in the Middle East. As we speak, Yazidis, Bahai, Kurds, Christians and Muslims are being executed and expelled by radical extremists at a rate of 1,000 people per month.

How many resolutions did you pass last week to address this crisis? And how many special sessions did you call for? The answer is zero. What does this say about international concern for human life? Not much, but it speaks volumes about the hypocrisy of the international community.

I stand before you to speak the truth. Of the 300 million Arabs in the Middle East and North Africa, less than half a percent are truly free - and they are all citizens of Israel.

Israeli Arabs are some of the most educated Arabs in the world. They are our leading physicians and surgeons, they are elected to our parliament, and they serve as judges on our Supreme Court.

Millions of men and women in the Middle East would welcome these opportunities and freedoms.

Nonetheless, nation after nation, will stand at this podium today and criticize Israel â the small island of democracy in a region plagued by tyranny and oppression...

The European nations claim to stand for LibertÃ©, ÃgalitÃ©, FraternitÃ© - freedom, equality, and brotherhood â but nothing could be farther from the truth.

I often hear European leaders proclaim that Israel has the right to exist in secure borders.

That's very nice. But I have to say â it makes about as much sense as me standing here and proclaiming Sweden's right to exist in secure borders.

When it comes to matters of security, Israel learned the hard way that we cannot rely on others â certainly not Europe...

As we came into the United Nations, we passed the flags of all 193 member States. If you take the time to count, you will discover that there are 15 flags with a crescent and 25 flags with a cross. And then there is one flag with a Jewish Star of David. Amidst all the nations of the world there is one state â just one small nation state for the Jewish people.

And for some people, that is one too many.

As I stand before you today I am reminded of all the years when Jewish people paid for the world's ignorance and indifference in blood. Those days are no more.

To the nations that continue to allow prejudice to prevail over truth, I say "J'accuse."

I accuse you of lending legitimacy to those who seek to destroy our State.

I accuse you of speaking about Israel's right of self-defense in theory, but denying it in practice.

And I accuse you of demanding concessions from Israel, but asking nothing of the Palestinians.

In the face of these offenses, the verdict is clear. You are not for peace and you are not for the Palestinian people. You are simply against Israel."
Date
November 24, 2014
Title
Statement by Israel at the UN General Assembly on the “Question of Palestine”
Original Source
http://embassies.gov.il/un/statements/Pages/Question-of-Palestine-Debate.aspx
Attachment
Click here to view this document in MS Word/PDF format