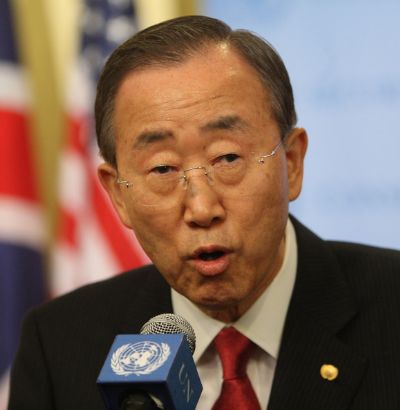 UN Secretary General Ban Ki-moon
At a UN seminar addressing reconstruction in Gaza, UN Secretary General Ban Ki-moon demanded that Israel demonstrate its commitment to peace and security and two states - presumably including a Jewish state - but placed no such demands on Hamas. In his opening remarks at the United Nations Seminar on Assistance to the Palestinian People, the Secretary General stated: "I ... expect that the new Government of Israel will extend its full cooperation to the efforts of the international community and reaffirm its commitment to the vision of two-states living side-by-side in peace and security."

The Secretary General also ignored Israel's security concerns regarding Hamas' use of building materials to rebuild terror tunnels and called for full openings of Gaza crossings. He stated: "I repeat my call on all sides to take immediate steps to...ensure a full opening of the crossings into Gaza, including Rafah, to allow for legitimate trade and movement of people."

Indeed, rather than denounce the terrorist organization Hamas, the Secretary General urged that Palestinian groups to reconcile with it. "I urge the Palestinians to overcome their divisions..."
Date
March 31, 2015
Title
Secretary-General, Concerned by Slow Pace of Gaza Reconstruction, Urges Donors at Vienna Seminar to Honour Aid Commitments for Palestinians, United Nations
Original Source
http://www.un.org/press/en/2015/sgsm16627.doc.htm
Attachment
Click here to view this document in MS Word/PDF format