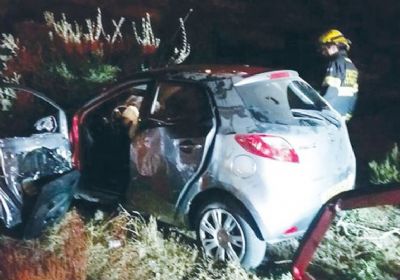 The car of the Israeli man after his fatal collision caused by stone throwers on Rosh Hashana (ARIK ABULOFF / JERUSALEM FIRE AND RESCUE SERVICES)
Speaking at the opening of the 30th session of the UN Human Rights Council in Geneva on September 14, UN High Commissioner for Human Rights Zeid Ra'ad Al Hussein criticized democratic Israel's efforts to counter the antisemitic Boycott Divestment Sanctions movement as a human rights violation.

In his words: "I am profoundly dismayed by the persistence of serious human rights concerns in Israel and the Occupied Palestinian Territory... I am also concerned by an increasingly restrictive atmosphere in Israel, including for those who are critical of Israeli occupation policies and practices, and by legislation that enables financial penalisation of those who advocate for boycotts of Israeli settlements."

The High Commissioner did not bother to mention or condemn the murder the previous day of an Israeli man whose car was struck by rocks thrown by Arabs while he drove home from a Rosh Hashana dinner.
Date
September 14, 2015
Title
Opening Statement by UN High Commissioner for Human Rights Zeid Ra’ad Al Hussein at the 30th session of the Human Rights Council, United Nations
Original Source
http://www.ohchr.org/EN/NewsEvents/Pages/DisplayNews.aspx?NewsID=16414&LangID=E
Attachment
Click here to view this document in MS Word/PDF format