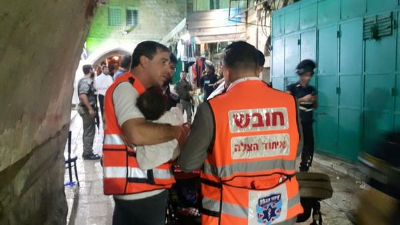 A baby injured on October 3, 2015 in stabbing attack by Arab terrorist in Jerusalem, being treated by medics (Twitter)
In a statement issued on October 6, 2015, UN Secretary General Ban Ki-moon condemned the deaths of four Palestinians - while failing to mention that two of the Palestinians were killed while stabbing Israeli civilians. The press statement states:

"The Secretary-General is profoundly alarmed by the growing number of deadly incidents in the West Bank, including East Jerusalem. The last few days of clashes, which resulted in the death of four Palestinians, including a 13-year old boy, and hundreds injured, are yet another worrisome sign of violence potentially spiralling out of control. The Secretary-General condemns the killings and looks to the Government of Israel to conduct a prompt and transparent investigation into the incidents, including whether the use of force was proportional."

The move comes two days after the Secretary-General linked concern over the recent murders of Israeli civilians to "injuries to Israelis and Palestinians".

On October 1, 2015, Palestinian terrorists shot two Israeli parents to death in their car in front of four of their children. On October 3, 2015, a Palestinian stabbed two Israeli men to death in Jerusalem's Old City, also injuring one of the men's wife and baby. Later on October 3, another Palestinian stabbed an Israeli teenager. Security forces killed both Palestinians in the middle of their stabbing attacks on October 3.
Date
October 6, 2015
Title
Statement Attributable to the Spokesman for the Secretary-General on the Situation in the West Bank and Jerusalem, United Nations
Original Source
http://www.un.org/sg/statements/index.asp?nid=9100
Attachment
Click here to view this document in MS Word/PDF format